Sorry, Bono, You’re Too Doubting – why Xstian rock is going to Hell (in a handbasket) 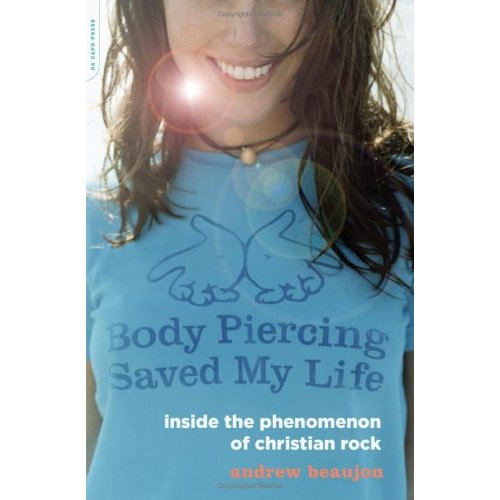 The proof? Well, there’s a host of clinical evidence confirming this self-satisfied Old World view of New World nuttiness, from the invasion of Iraq to American Football – which looks much like the invasion of Iraq, but less conclusive and with more pom-poms.

However, the real clincher, the cast-iron proof for us that our colonial cousins are mad as soft cheese past its sell-by is the way so many of them can’t stop shouting about mysweetlordjesuschrist! and how He diedonthecrossformeee! And that’s just their President. Americans are at their bug-eyed barmiest when they are banging on about Gawd. After all, everyone knows that He is actually British and hence he doesn’t like to make a fuss.

But Americans at their fruitiest are also usually at their most entertaining. At least from a safe, smug distance. How many mediocre media careers on this side of the Atlantic have been made out of pointing at yonder Yankee craziness and smirking? Which reminds me, here’s another example: Christian rock music. It’s booming, apparently. Christian rock bands such as Mute Math and Resurrection Band are selling faster than hot cross buns and almost as fast as, well, sin – along with a whole “spiritual” parallel pop culture Universe of “extreme teen Bibles”, skateboarding ministries, Christian tattoo parlors, Christian coffee houses and nightclubs. Hey dude! Being Christian is, like, way cool! Look, man, my bitchin’ skateboard is made from the Cross of Jesu!

“My wife is British,” writes Beaujon. “And it kind of freaks her out how vocal people here are about their faith, but I love it. There’s something so beautifully American about this country’s crazy-quilt religious landscape, where you can find a hundred different views of God within a five-minute walk.” Well, yes, “crazy-quilt” sounds about right. Though I wonder how fast he’s walking, and what kind of population density there is in his neighbourhood.

Beaujon of course doesn’t mean the word “crazy” in the way that you or I might. He may not, unlike the vast majority of his fellow Americans, believe in God, and I suspect he’s something of a liberal, but he seems, like our liberal RE teacher premier Tony Blair, to believe very much in religion. Richard Dawkins might never forgive me for saying this, but he does have a point. America may have given the world a very secular pop culture, but America itself is anything but secular. God may be dead in the Old World, or at least living in a retirement bungalow in Rottingdean, but in the New World he’s going skateboarding – and running the country.

The “craziness” of American religiosity, the “legion” of millenarian voices in America’s head that helped build that great country, and to make Americans as optimistic and generous, as spontaneous, as creative, as industrious and as weird and as finally unknowable as they are is not something that should be smirked at. Probably. Without it, American secular culture – like rock music – wouldn’t be what it is and we in Britain would still be buying skiffle records. So it’s perhaps not so strange that non-believer Beaujon, a writer at Spin magazine, would want to “celebrate” America’s religious mania in its musical form. Especially since, as he points out, no one else has written a book about Christian rock before – and, being economically realistic (the flip-side to American religious psychosis), believers are most likely to buy it.

Unfortunately, he doesn’t succeed in making it sound very appealing. I don’t know what it’s actually like to attend a Christian rock concert, or chat to Christian rock stars, or to be saved for that matter, but reading about it is perfectly hellish. When it isn’t so tedious that it makes you want to recite the Lord’s Prayer backwards.

Beaujon’s “accentuate the positive” ethos may be very American, it may be shrewd, but it’s a literary and critical disaster of near-Biblical proportions. It’s only two thirds of the way through the book when writing about “worship music”, a praisethelord! genre of Christian music strictly for the already converted, (which, if I was the Lord, would incline me send a plague of toads and locusts by return heavenly post) that he allows himself to say something nasty – something worth reading:

“Worship tunes tend to evince an adolescent theology, one that just can’t get over how darn cool it is that Jesus sacrificed himself for the world,” he writes. “Our God is an awesome God.” “O Lord, you are glorious.” “How can it be? That you, a king, would die for me?”‘

The problem for Beaujon and for Christian rock is that that while, yes, quite a few of the people buying Christian rock in the US are not that Christian, and some Christian bands are not without critical merit, essentially all Christian rock (as opposed to rock made by Christians) is by definition a form of worship music, when it’s not screeching about how gay marriage is legalised bestiality and abortion is a holocaust. All monotheistic religious belief is slightly adolescent – my daddy is bigger than yours. Of course, rock music is itself very adolescent (praise God), but the point is that “proper” rock music doesn’t pretend to be grown up and respectable and going to heaven. Unless you’re U2.

Actually, as Beaujon points out, U2 are banned by Christian radio stations because of their “doubting” lyrics – and Bono’s criticism of grasping American tele-evangelists. Though they will play cover versions of their songs. And that, I’m afraid, despite Beaujon’s protests, is what Christian rock seems to be: a lame cover-version of the real thing. One that for all its piety, strangely lacks conviction.

In the end – or at the last trumpet – the problem is that Christian rock isn’t bonkers enough. It’s too wordly. It’s Christian consumerism: a holier-than-thou but essentially second-rate XstianTM lifestyle.