Gordon Isn’t a Moron – But He’s a Terrible Liar 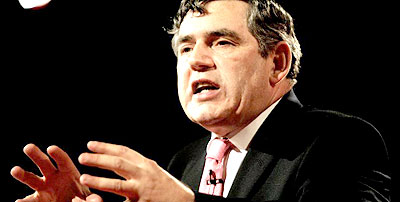 Gordon Brown, Labour’s leader-in-waiting, can’t win the next election. This week’s address to the Labour Party Conference might as well have been his speech conceding victory to David Cameron.

Why is Gordie such a liability? Not because of the disdainful verdict of dodgy Newsnight focus groups, or his recent impatient unleashing of political-suicide bombers on Number 10, or even because his Conference speech with its liberal use of the word ‘aspirations’ sounded like that of an ambitious TUC chief, but because he’s such a bad liar.

The proof? The most embarrassing, excruciating lie from that speech – “It has been a privilege for me to work with and for the most successful ever leader and Labour prime minister” – has dominated the coverage of it.

That it should have been Cherie Blair, wife of the most successful ever lying Prime Ministers in British history who pointed this out to the world is entirely appropriate. After all, she must, by now, be something of an expert. She was though entirely right when she claimed she was misheard: she didn’t say, ‘Well, that’s a lie.’, you see. What she actually said was, ‘God, you’re such a bad liar’.

Certainly, we all squirmed and tutted when we heard him. It may or may not have been an endorsement that was wrung out of Gordon by the application of a hot poker to the Chancellor’s red box, but it was definitely torture for the rest of us. Even though Tony has yet to relinquish the reigns of power, and despite the fact that we’re all, in one way or another, as tired of him as he now looks, it was difficult watching Brown’s near-autistic delivery not to feel like we were missing Tone already. A feeling only enhanced by Blair’s Hollywood performance the following day, complete with his trademark, quavery-voiced sincere insincerity and impressively shameless use of the word ‘truth’ in the first few seconds of his final speech to Conference.

Those who complained that ‘Blair lied to us!’ after it emerged that there those Weapons of Mass Destruction in Iraq were so fiendishly well-hidden that they, er, actually didn’t exist at all, slightly miss the point. It’s his job. Tone has been so successful and so popular for so long precisely because he lies, and lies so well. Even after he has been caught lying in Lying Town, as with Iraq, he comes up with other lies that are equally if not more persuasive, or at least momentarily diverting. He was, if you remember, re-elected with another thumping majority after the criminal Iraq debacle.

Iraq aside, Tone usually tells us the lies we want to hear – and he tells them extremely convincingly. That’s what a politician’s job is. That’s what we elect them for. That’s what ‘aspirations’, the things Brown kept referring to in his speech, really are. Otherwise known as ‘illusions’. It’s the basis of most relationships. Like most suffering wives, however, what we don’t like and will not tolerate is having our faces rubbed in it . This is why the Hungarian PM and Blair pal Ferenc Gyurcsany got into such a pickle. Not because he lied but because he admitted – even behind closed doors – that he lied.

Admitting he lied is not a mistake Blair is likely to ever make. Blair’s special talent, the thing that puts him ahead of most other politicians, certainly in British political history, is that he can convince himself his lies are literally the god’s honest truth, at least for as long as he’s telling us them. And – truth be told – in his mind, he never actually ‘lies’ to us at all. He’s an actor – an actor of the Stanlislavsky school: the emotion he shows us is ‘true’, it’s just usually attached to something that is not. This is why he’s such a great performer and politician – we appreciate and are flattered by the energy and the psychosis he puts into his performances. He is a great manipulator. (His final tear-jerking address to the Labour faithful demonstrated that.)

Brown on the other hand is a great operator. And operators, unlike manipulators, are painful to watch. They resent having to manipulate us and we resent having to watch them resenting having to manipulate us. Tony is Princess Di to Brown’s Prince Charles. Brown, who tells us he is ‘quite private’ and who prefers ‘substance over celebrity’ as if these were reasons why we should be interested in him, clearly wants power but he doesn’t really want to become the thing that power is in this mediated day and age: an actor. He won’t be forgiven for that by the electorate/audience. Clearly he will lie and lie to get the top job and to keep it – he has already proved this to us by carefully parroting Tony’s lies about Iraq, for example – but unlike Tony he won’t do us the courtesy of lying convincingly, let alone entertainingly.

The delivery of his speech yesterday was full of visual proof of this. I have no idea what Brown is like in the flesh, but on telly – i.e. the real world – Brown looks like a loser. Dead, hooded eyes which offer no contact with the audience or the camera, choreographed but strangely ill-timed, clawing hand movements and weird goldfish-like gulps at the end of each line. After nine years of Tony’s glamorous drag queen charisma, he looks like a particularly deluded punter auditioning for X-Factor while Simon Cowell pulls faces.

Brown may well, as he says, ‘relish’ the opportunity to ‘take on Cameron’, but Cameron looks increasingly likely to simply sweep him aside. After a couple of years of Brown-ness the electorate will stampede to elect the smooth, moisturised, green-ish manipulator Cameron, someone who knows exactly what we want to hear and how to coo those sweet nothings in our ears. By then he’ll be seen as Tony Blair without Iraq. Tony Blair without the TUC. Tony Blair without the haggard face.