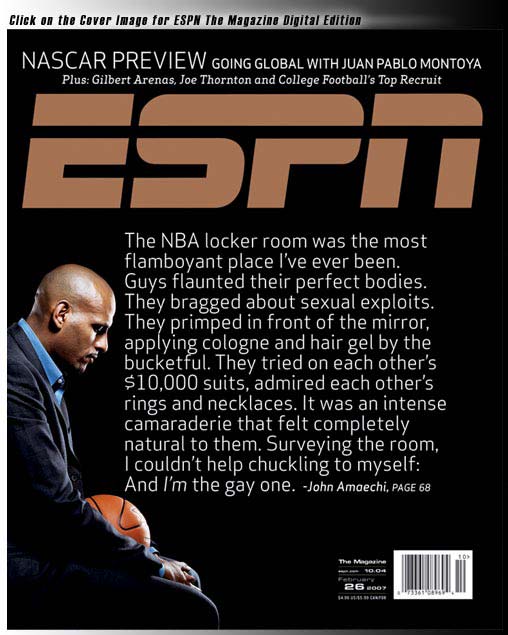 Not by ‘naming names’, but simply outing from inside the locker room itself the homoerotic metrosexuality of hetero athletes.

Perhaps this is the real ‘problem’ with homos in the locker room (and the barracks): not that their penis will somehow inveigle its way into the hallowed hetero anus during a communal shower – when a happily married athlete is distracted by the steam, his exuberance, or his dropped hair products – but that the homo can’t be relied upon to not see the homoerotic and name it. I certainly can’t. (Maybe it’s a Brit queer thing: Amaechi is also from the UK.)

The possibility that the team-mate slapping their round firm naked butt might be ‘batting for the other side’ is apparently too much for some to bear. It’s perhaps understandable though. After all, once it’s named it does make it slightly more difficult for those straight guys who are uptight and homo-hating to enjoy their passionate, swooning love of men, virility and the male body.

On the other hand, billboards and other rather public media have been advertising this spornographic tendency for some time now.

Incidentally, it would appear that full disclosure of the antics of the pro locker room is too much to bear for ESPN too: the Amaechi excerpt seems to have been censored. Here’s the unexpurgated version:

“The pro locker room was the most flamboyant place I’d ever been this side of a swanky club full of martini-drinking gay men. Chris’ [Mills] alligator shoes were the least of it. The guys flaunted their perfect bodies. They bragged of their sexual exploits. They checked out each other’s cocks. They primped in front of the mirror, applying cologne and hair gel by the bucketful?”

While some of the snips may have been for reasons of space – or taste: martini drinking gay men and alligator shoes are both fairly objectionable – the circumcision of the mention of straight athletes checking out each other’s manhood seems slightly hypocritical.

Not to mention mean. After all, if the rise of Sporno shows anything at all it’s that we’re all, gay and straight, sports mad or sports indifferent, feverishly imagining that athletes do nothing else in the locker room.

In the extract English Amaechi mentions something else that is also rather revealing. He claims that despite his ‘flaming’ friends, his taste for Karen Carpenter, rainbow flag towels and general indiscretion the reason his sexuality wasn’t suspected was down to his un-American-ness. Apparently, the catch-all response to his non-conformity with the iron American laws of guy-ness was: ‘”Oh, leave him alone, he’s just English’.”

Which is rather sweet. And does of course help to explain the popularity of fey Englishmen, from Quentin Crisp to David Bowie, Boy George to Morrissey, David Beckham to Tony Blair in a country where home-grown effeminacy can sometimes be more un-American than Communist Islamic drug-trafficking.

Perhaps the extraordinary popularity of the metrosexual Stateside had something to do with the fact he was also English by birth. Though it was America who invented the consumerist and ‘ennervated’, mediated culture that made him possible, if not inevitable. When open metrosexuality threatened to be too popular a sensibility in the US and reveal where the American lifestyle had brought American masculinity there was a backlash against the ‘gayness’ of metrosexuals.

Yet another reason why metrosexual pin-up Beck’s move to the US will make for fascinating viewing. Judging by the American media whirlwind that has greeted Amaechi’s post-retirement coming out, a globally famous sportsman who is very much out-of-the-closet about his flaming metrosexuality and also his fondness for his gay fans and eager to pose for spornographic photo shoots will raise a few Colonial eyebrows. Being English and married with kids won’t, I suspect, excuse him completely, even in LA.

What’s more, he’s being paid a record-breaking fee by his sponsors to persuade a generation of young American males to be ‘English’ too.

The English are coming. Because, as the Amaechi story – and the recent Superbowl Snicker ad debacle – shows, American masculinity desperately needs us.

Sporno Can’t Be Straightened Out