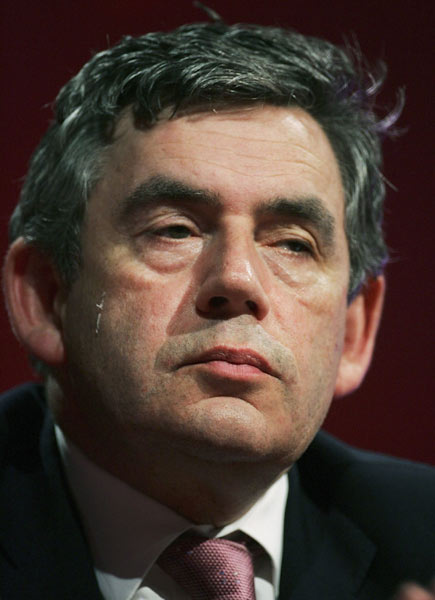 Excuse me, but who is our Prime Minister? No, really, who is he?

Yesterday I saw a dour looking Scottish geezer who looked like he’d spent too long working in the basement of a bank give a painfully awkward speech outside Number 10 about the changing need for change and how he will try us to his utmost, before grimacing for the cameras and scurrying inside. People tell me that he’s now our leader for at least the next couple of years.

That’s funny, I don’t remember voting for him at the last election. He wasn’t even elected by his own Party. And didn’t he rule out, just before he became our unelected PM, the possibility of a referendum on the new EU constitution/treaty? I get the feeling that whoever this guy is, he’s not exactly a great democrat.

Judging by his performance outside Number 10, one he’s had ten years to prepare for, I can see why our new PM might not be keen on public scrutiny – or elections. He’s never going to win any popularity contests. Odd also how after all the coverage of the handover from Blair to Brown in the last few weeks, not to mention his ten years in No.11, we don’t really have any idea who this man lording it over us is – or much real curiosity. His name could be Gordon Beige.

Yes, I know the official line. I know that we’re not a Presidential Democracy, that we supposedly vote for parties and not persons, but, frankly, that’s a tosh, and everyone knows it. It was already tosh in 1997, but ten years on it’s tosh on toast. As far as most voters in this ‘press your red buttons now’ age are concerned, Brown is someone who managed to rig the phone-voting and end up winning X-Factor (albeit the lower-rating, digital channel political version).

A ‘cabinet of all the talents’ as proclaimed by Brown won’t disguise the fact that his own talent as a leader in an age of mass media is hidden under a bushel. The more people are exposed to Brown’s charisma-deficit – and on TV he looks like death defrosted – the more they will rebel. Brown can talk as often as he likes about ‘the end of celebrity culture‘, and pray that people will be glad to be rid of Blair’s Hollywood ways, but it won’t change the fact that in this mediated age politicians have to be actors and performers who have to offer us – however simulated, however faux – intimacy. And have hair that doesn’t look like it’s been styled by a 1970s local authority.

Enter, stage-right, glistening with hair gel, moisturiser, and bottled shamelessness, whispering sweet nothings in our shell-likes, David Cameron who has successfully metrosexualised the Tories, and made them a more desirable, wearable, and almost shagable party.

Adding to New Labour’s woes, Brown is not just dull and unelected he’s Scottish – and representing a Scottish constituency. Not because the English are now plagued with Scotophobia (Scottish people are much more popular in England than the English are in Scotland), but because the Scottish are able to elect their own government. And a Nationalist one committed to independence at that. While the English are not – and Scottish MPs, like Brown, continue vote on English-only issues. Every time our Prime Minister opens his mouth it will remind English voters of their disenfranchisement.

Brown is aware of this. That’s why he plans to introduce a ‘British Day’. Which, of course, is not for Scotland or Wales: they would, anyway, have no truck with such arrant nonsense now that they are busy being Welsh and Scottish. It’s aimed squarely at England and the English. At keeping them deprived of their own identity and under the thumb of a Scottish-led New Labour dependent for power on Scottish votes. It’s not ‘Britain Day’ at all, but ‘Brownish Day’.

Not to worry though – it will probably be cancelled due to lack of interest.