Pillars of the community – the Phalliban pops up again

In the latest example of the prudish power of the USA’s rampant Phalliban, outraged residents of Kaiser, Oregon, have demanded the removal of some newly installed safety pillars. 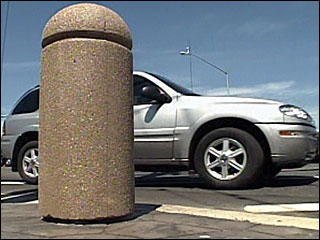 Apparently they are too reminiscent of male genitalia. What a load of bollards.

Although I’m no expert on American penises, I’ve seen a few in my time – and I don’t recall any being made out of four feet of reinforced concrete. And I think I would have noticed.

I suspect the good women of Kaiser (and it does appear to be women in the report doing the complaining) are just bragging.

And if you’re talking offensively penis-shaped eyesores, humongous 4x4s like the one pictured behind the cheeky bollard – whose hefty momentum the pillars have clearly been designed to protect pedestrians from – look much more phallic to me.

The city council, eager to placate the American Phalliban, plans to modify the appearance of the pillars with metal collars and chains. Though why S&M pricks should pass without comment where vanilla ones aroused a storm of indignant protest is unclear.

If this approach fails, the council has pledged to remove the pillars. Perhaps they should dynamite them like the Taliban did with the Buddhas of Banyan.

Surely though the cheapest way to disguise the phallicism of pillars like this in the US would be to give them foreskins? Or just make them wear really baggy board shorts?

‘Is Mika just the 21st Century version of Morrissey?’