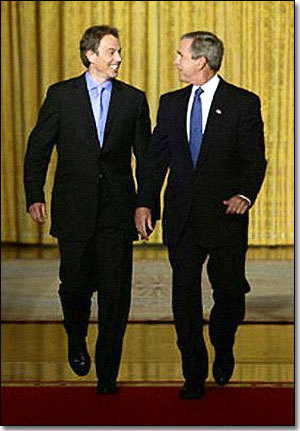 One of the more revealing ‘revelations’ to emerge from the hype surrounding Alastair Campbell’s kiss-and-tell £1M memoir of his time as No.10’s press secretary is that on the eve of Parliament’s vote authorising military action against Iraq , George Bush promised Tony Blair “If you win the vote in Parliament, I’ll kiss your ass”.’ (You can see Blair’s reaction in the picture on the left.)

The President’s touching offer to kiss Tony’s Blairy arse means history may have to be revised. It seems that the ‘special relationship’ between George and Tony was more versatile and reciprocal and truly loving than many bitter and plainly jealous observers have hitherto suggested. ‘Yo Blair’ was perhaps not doing all the tonguing. At least when Bush wanted something.

Funny though that Campbell should have chosen to reveal this slightly bitchy tidbit about George and Tone’s private relationship – especially when you consider that, until Campbell’s resignation after the Iraq invasion in August 2003, Blair’s relationship with Campbell was even closer than his relationship with Bush.

And if you think I’m putting my own over-heated spin on matters, here’s how the blurb for Campbell’s own book puts it: ‘As Blair’s press secretary, strategist and trusted confidant, Campbell spent more waking hours alongside the Prime Minister than anyone. His diaries… take the reader right to the heart of government.’ That seems pretty ‘sexed-up’ to me. By the sound of it, poor Cherie only got to be ‘alongside’ Blair when he was snoring – worn out no doubt from all that heartfelt bonding with Alastair. 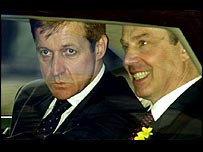 Blair seems to have a swooning, almost endearing weakness for bruisers and spivs – if they can bring him power and fame. The ex-tabloid hack turned feared Blair henchman and unelected spinmeister was dubbed ‘the real Deputy PM’. Actually, this underestimated Campbell’s role: he was more like Blair’s Simon Fuller, the Spice Girls manager. Especially after bitter love-rival and New Labour Svengali of Smooth Peter Mandelson was removed from the picture.

Blair’s record election victories and personal popularity owed much to Campbell’s street-smart savvy and huckster ability to repackage and ‘sex up’ Posh Blair for the tabloid market. Once the pious George & Tony show replaced the laddish Alastair & Tony one, the Spice Boy of British politics stock with the electorate slumped faster than Geri’s solo career. Blair may have always wanted to be big in the US, but the British public were never too keen on Blair’s Stateside ambitions, even before they turned to ashes in the post-invasion Iraq conflagration.

Blair did win the war vote of course, and with it Bush’s undying love. Thanks largely to the so-called ‘dodgy dossier’ that trusty Alastair presented to the press. Alastair’s dossier was in effect the dowry on Bush and Blair’s marriage – and will probably be his own epitaph as it was the beginning of the end of his political career. So, no wonder if he’s a little bitter. The dossier led to front page headlines in the UK press suggesting we were just 45 minutes from a chemical attack by Iraqi missiles. As we all know now, ‘Chemical Ali’ Campbell turned out to be the only WMD that was pointing at the British public. Today we should be thankful he’s merely dropping his 816-page diary on us.

But did George make good on his promise to kiss Tony’s lily-white Brit-ass? I think we need to be told. Polaroids need to be produced – however gruesome. Given the loss of hundreds of British lives, untold numbers of Iraqis, several suicide bomb attacks on UK soil by home-grown jihadists, and, worst of all, the destruction of Tony Blair’s treasured ‘legacy’, it would have to be a really special ass kiss.

I think at the very least a rim-chair would have to be involved.