You’re going to be seeing even more of both.

As most of the world already knows, today Becks is proudly ‘unveiled’ by LA Galaxy on their home turf. Brand Becks, the ultimate metrosexual who transformed himself from a talented professional soccer-player with a cute smile into global me-dia, is the not-so-secret weapon in their campaign to seduce America into opening its arms, legs – and, most importantly, wallets – to that obscure version of football played without crash helmets, Frankenstein padding or artillery barrages by the rest of the world.

In case you can’t wait for the unveiling, you can find a selection of adorable photos of Ken Doll David ‘taken’ from every delicious angle in his new strip in The Times of London. Or coquettishly meeting your gaze on the cover of Sports 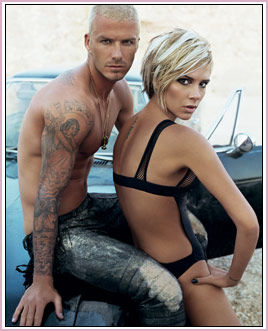 Illustrated, on a red carpet. Or stripped to the waist on a car bonnet on the cover of ‘W’ magazine flexing his tits and tatts in trousers that appear to be pulling themselves off. Oh, and that ex-ex Spice Girl wife of his is somewhere in the picture too.

And, of course, you can always catch Brand Beckham endorsing major brands like Motorola and Nike. Or is it the other way around?

Spice Boy Becks is the total commodity who has totally commodified himself – and turned soccer into his personal billboard. ESPN, the channel televising Beck’s first game in his LA Galaxy strip on 21 July have arranged for an extra TV camera to feast solely on David for the duration of the entire game, lest we miss any precious moment of his spornographic body in motion – as well as making sure that they get their money’s worth. Who said that football was a game of two teams of eleven men? Or two halves? Becks is all that you could need and all that you could want. The Alpha and Omega of soccer.

ESPN are already airing an ad promoting the match in which Becks leaves a heartbroken Europe for an ecstatic US, with the Beatles’ ‘Hello Goodbye’ as the soundtrack – referencing a previous ‘Brit’ invasion. Some are already talking about ‘Beckmania’. The Beatles may have been bigger than Jesus, but Becks is bigger than soccer (which is why all those lengthy articles debating whether he will or won’t make soccer popular in the US somewhat miss the point).

And after all, in the Sixties the Mop Tops successfully exported pop music back to the US, the country of its birth, having taken it further and transformed it into something even more saleable. Becks in the Noughties is exporting metrosexuality back to the US, and in fact to the very town, which, in the Fifties, came up with the prototype for it in the delectable, Cinemascoped form of Marlon Brando, Monty Clift, James Dean, and Elvis Presley.

It was also the US that produced possibly the first metro sports star in the form of Seventies NFL star Joe Namath, dubbed ‘Broadway Joe’, an aesthetically inclined quarterback who advertised shaving cream and… pantyhose. But once he retired, America pretended he had never happened – leaving the field open to dandy foreign players like David Beckham.

America and Hollywood, so long at the cutting edge of commodifying masculinity, have fallen far behind. America is today conflicted, fearful and hypocritical about one of its greatest inventions: the mediated, male sex object. Speedos, the perfect ‘package’ for the male body and Beckham’s favourite beachwear, are all but banned on US shores because they are seen as ‘gay’. Which, apparently, is still the worst thing you can accuse a man of in the US – and the reason why the US, unlike the UK, experienced a backlash against metrosexuality, albeit a men-dacious one.

American masculinity desperately needs some tarty tips on how to tart it out more. Enter Becks, the tartiest tart in Tart-Town who relishes being seen as ‘gay’ – and also relishes being seen by gays (‘because they have good taste’). What’s more, he’s a jock not an actor.

Which reminds me, perhaps Becks will offer some friendly advice to his new Scientologist neighbour Tom Cruise. Cruise, the All-American Dream Boy gone wrong, who once wooed the world by dancing in his underwear on a sofa in his 80s film ‘Risky Business’, but now jumps up and down on chat show sofas (while President Bush jumps up and down on Iraq), needs Becks more than Becks needs Cruise, who is now globally much less popular than Becks.

However much Becks may deny movie star aspirations, his Hollywood career has already begun.