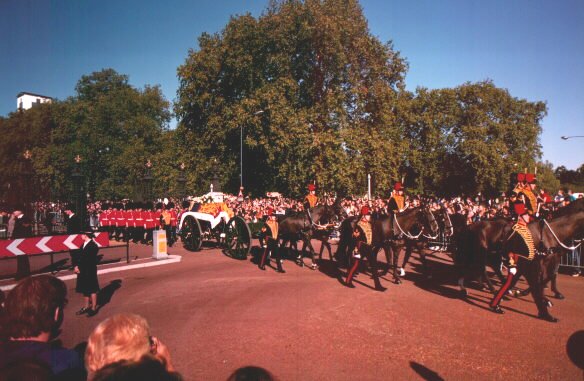 An extract from The Queen is Dead:

Greetings from the Kingdom of Diana.

I never thought I’d live to see a revolution in this country, but that’s almost what happened here after the Princess of Wales took a ride in a car driven by one of those Parisians who make you wonder why they bother painting white lines in the road. The famous stoic stiff upper lip of the English has quivered, cracked and broken into public sobbing. And who has achieved all this? A bulimic, self-mutilating, manipulative blonde bimbo from a broken home.

After our own (black) Velvet Revolution, Princess Diana is the dead drama-queen of all our hearts.

OK, so I exaggerate a tad. But by sheer pressure of public outrage over their silence after Di’s death the Royals were forced to return to London early from their traditional Scottish holiday at Balmoral. In the British context it was as if they’d returned in a cart lined with straw and rotting vegetables.

I visited Kensington Palace, Di’s former royal residence, the Day After, escorted by my glamorous tranny friend (and former male stripper ‘Stud-U-Like’) Michelle and her male-to-male trannsexual model friend Enzo (Pierre et Gilles have painted him, but this was an exercise in redundancy since the flesh-and-blood Enzo is so perfect, so airbrushed and colorized already – he’s post-production). Both Michelle and Enzo adored Di. They recognized a kindred spirit. But that didn’t stop Michelle joking, as we approached her former home, ‘It’s a good job she sold those frocks, otherwise William might have turned into a Norman Bates!’

Hundreds of candles guttered in the wind at the foot of the railings in front of the palace; thousands of bouquets of flowers and messages fluttered on the railings; an ocean of flowers in front of the gates gave off a shockingly strong smell of sweetness that filled the eerily silent air. A long, respectful procession of people clutching their own tributes inspecting those that had already been left there shuffled past – giving murderous looks to Mich and Enzo who were kneeling in front of the candles singing, a la Madonna, ‘Life is a mys-ter-ry…‘.

The next night I took The Divine David [a performance artist from Manchester who sings Smiths songs in the style of Shirley Bassey while looking like an exhumed Bette Davies] to Ken Palace as well. At the sight of all this sombre devotion he burst into tears and croaked in a small, hardly ever heard un-ironic voice, ‘This is what love looks like, Mark.’ The implication being that this was the closest he or I would ever get to it. He cheered up, however, when I drew his attention to one of the madder messages pinned to the railings:

‘YOU who are responsible for the death of DIANA will find no hiding place, you will DIE in agony and be sent straight to HELL – the CURSE of TUTTENKAMON is upon YOU!’

A week later, the night before the funeral, I accompanied David to the gates of Buckingham Palace, where a different kind of demonstration was happening. Initially I hadn’t understood why people were placing flowers there, but it rapidly became apparent that for some it was a calculated snub to the Royal Family who were considered to be covered in Diana’s blood. David harangued the CNN cameras, shouting ‘LIARS!’ as they interviewed hand-picked people to announce how satisfied they were with the Queen’s humble-pie TV address earlier that day.

He also confused unsuspecting bystanders by asking them what they thought about the (non-existent) second broadcast she made: ‘Personally, I think she did the right thing,’ he’d say, looking suitably serious/sympathetic. ‘It’s the best for the country. I mean, abdication was the only thing she could do…’ Or: ‘Apparently they’ve announced open house and the Duke of Edinburgh’s having a barbecue in the back garden. Liz has also agreed to allow people to sit on ‘er throne and try on ‘er crown so they can get some idea of what it’s like being Queen.’

Then he produced, from where I have no idea, a pair of big inflatable red lips with a flashing torch attached to the back that made them pulse with light. Clambering clumsily over the floral tributes, he hung them on the palace gates making the large round ornaments above the hinges look like eyes and the whole gate like one huge crazy cartoon. As David put it, for a moment (before the police removed them) the Battenburg-Saxe-Coburg-Gothas had a human face.

Sadly, the evenings jinks came to an end when the police, who had been eyeing us warily since we arrived, suddenly accosted us, asking David threateningly. ‘Planning to ‘ang around, Sir?’

‘No, I think not officer, said David tactfully. ‘I’ll be on my way.’

Outside Westminster Abbey the next day I saw the coffin arrive on the gun carriage (David: ‘How offensive that they should have put a woman who campaigned against land-mines on a gun-carriage and wrap her in the Royal standard when they deprived her of her royal title coz they though it’d be a laugh that she would have to bow to her own kids!’). Sweltering in the sun, we listened to the service, and clapped loudly at Earl Spencer’s bitter speech. Some people cried quietly. I didn’t.

Which is just as well. A CNN camera was inches from my face. Not to worry though, CNN had apparently arranged for a couple of girls next to them to weep and sob openly through the service. When a woman fainted the cameraman leapt down to clear people away, shouting, ‘Give her some air!’, only so that he could start filming her. At this the crowd turned into a lynch-mob: ‘STOP FILMING HER!’ they yelled as one. And he did.

After the service ended I went home and watched on television the funeral cortege drive through North London, along Hendon Way (a mile or so from here) and up the M1 to the Spencer estate in Northampton. All along the route, which was over 50 miles, people lined the sides of the road and threw flowers in the hearse’s path. Then, in the privacy of my own home, I finally allowed myself some some tears. It would have been churlish not to at such an image.

Life goes on, of course. An hour or so later I went to the supermarket. Which meant driving along Hendon Way. Already the flowers had been crushed into the road by the traffic, forming ghostly flower-shadows on the tarmac. It’s astonishing how flat flowers press, how little substance they have.

The next day in the gym, a young football-crazy lad I often chat to spoke to me about watching the funeral on telly. ‘I had a little cry,’ he told me. Strangely, I couldn’t quit bring myself to tell him I did the same. I also saw another gym-romance of mine, a twenty-something squaddie farrier (two fantasies for the price of one) with the Kings Troop Royal Horse Artillery – the Regiment who provided the gun-carriage and escort for Diana’s coffin. He had shod the horses that drew Diana’s coffin himself. How did he feel about it all?

‘Very sad,’ he said, fixing me with his guileless clear green eyes. ‘She was the best we had. You couldn’t help but cry.’

An extract from The Queen is Dead:

One Reply to “The Kingdom of Diana”