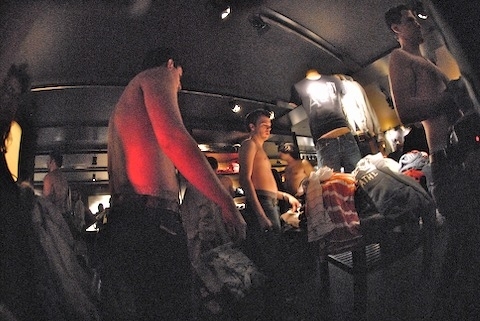 111 men descend on Abercrombie and Fitch’s giant 5th Avenue store in New York, and, taking their cue from the grinning topless model greeter, not to mention the plethora of pictures of topless men and a giant topless bronze statue in the store, peel their shirts off.

Apparently management were not amused and responded to this mass act of getting into the A&F schwing of things, by asking them to put their shirts back on or leave.

Which is a tad unkind. After all, they were flashing their tits for free. A&F have to pay their model to stand around with his nipples out.

So remember boys, Abercrombie and Fitch stores may look and sound and feel like a 1980s gay disco – but it’s only make believe. Don’t make the mistake of thinking that you can treat it like one.

Unless you’re a hustler.

3 Replies to “Abercrombie and Fitch crackdown on topless punters”