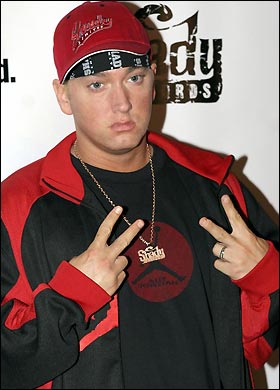 Eminem is overweight, addicted to drugs, suffering attacks of pneumonia, struggling with a heart condition, is a virtual recluse surrounded by parasitic hangers on and can’t write any new music, according to the Sun and his estranged mother’s new book.

Worst of all, Marshall Mathers, now aged 35 is ‘spotty’ eats ‘fatty food’ and has even let his bleached blond hair grow out. Now that is really tragic.

OK, so he’s going through a bad time at the moment, and spent Christmas in hospital with life-threatening illnesses, but there’s really no excuse for such sloppiness in a man these days is there?

Even his beloved daughter Haile appears to be deserting him: now 12, she is reportedly becoming more independent and no longer so keen on staying in and being being doted on by her daddy-mommy. And who can blame her if he’s got spots and needs a bleach job?

The Sun prints a still taken from one of Marshall Mather’s videos spoofing a fat, late-period Elvis who also took ‘traditional black music to the mainstream’ and points up the ‘irony’ of it all, how an obese Elvis locked himself in his Graceland mansion, surrounded himself with parasitic hangers-on and ‘died of a heart attack, aged just 43, after years of drug abuse’.

Well, now, it would be entirely churlish of Em not to complete the eerie parallel and die of a heart attack himself, wouldn’t it? (Note to Em: don’t wait til you turn 43 before helpfully dropping dead on the john as the Sun will have forgotten all about you by then.)

Unmentioned however is the main and most striking paralell between Elvis and Em: two Southern boys who loved their Mommas. And boys, who, in their own ways, never quite got over that – and certainly never grew up. The article does though quote some lines from his prescient song ‘Role Model’ that hint at this pathological Momma Love: ‘I’m bout as normal as Norman Bates, with deformative traits/A premature birth that was four minutes late’.

Norman Bates, some of you younger readers probably need to be told, was a 1950s Hitchcock psychopath (played by a homosexual actor) with multiple personality disorder (Slim Shady? Eminem? Marshall Mathers?), who kept the preserved body of his murdered mother in his basement and dressed up in her clothes to slash ladies he fancies to death with a large knife. Seeing as Em has rapped about slaughtering both his ex-ex-ex-wife Kim ‘the only woman I’ve ever loved’ and his smothering mother, the ‘New Elvis’ was clearly living at the Bates Motel instead of Graceland, at least inside his Gothic head.

As this bilious piece of mine below from 2003 shows, the ‘New Elvis’ turned into the old ‘Old Elvis’ some time ago. (And if you want to understand my disappointment, read this.)

Though in the pic used in the Sun (above) he appears to have turned into Boy George.

His majesty the baby

Isn’t it about time Eminem grew up? Mark Simpson on the rapper who elevated spoilt tantrums into an art form

A few years ago a pasty-faced, bleached-blond, underfed white boy rapper arrived on the scene waving a chainsaw who, thrillingly, seemed to hate everyone, especially himself. He took pot shots at all kinds of pretension and bullshit, including the fame that he had achieved for himself and the industry that had made it possible.

Although he was a white rapper, he was decidedly no Vanilla Ice. In fact, there was nothing vanilla at all about this scatologically talented, potty- mouthed misanthrope who sounded like Bugs Bunny crossed with South Park’s Cartman on crystal meth. He was hailed by some as the “new Elvis”, and although the comparisons were full of hubris, like Elvis he had taken a “black” music form and made it his own, and in the process fashioned a new kind of pop. In this instance one which seemed genuinely, dangerously, neurotically interested in words and narratives. For the first time in years, people began talking, arguing and even demonstrating about a pop star.

Marshall Bruce Mathers III, alias Eminem, alias Slim Shady, was the evil, comical, candy-buzz of consumerism laced with melt-in-your-mouth cyanide, promising a little indigestion in a saccharin-sweet, always smiling, aspirational pop industry of boy blands and Britneybots. On his smash-hit work of Gothic genius The Marshall Mathers LP (2000) he famously sneered, “You think I give a damn about a Grammy? Half you critics can’t even stomach me…”

And then in 2001 he appeared on the damn Grammys, in that very disturbing duet with the evil fairy godmother of showbiz pop blandness, Elton John. Millions of viewers were treated to the sight of Slim Shady conscientiously sucking the Grammys’ cock while a pink-polka-dotted bewigged Elton sucked his (Em later claimed he ‘didn’t know Elton was gay’). For his consummate skill at controlling his gag reflex, Em was awarded some Grammy consolation prizes for which he was gosh-awfully grateful. Countless other awards came his way, eliciting various other embarrassing, actressy acceptance speeches in a hip-hop stylee.

Then last year at the MTV Awards, when some audience members booed him, he accused “that girl” Moby of being behind it and threatened to beat him up. This was greeted with many more boos from MTV’s liberal-leaning great and good, and Em, seeing his career slipping away, ended up humbly apologising and mumbling something about attending “anger management classes”. So it was official. Em was just like all the other “faggots” he’d berated so profitably on his records: he only wanted to be liked. It was all about suckcess, again. It was just more showbiz bullshit.

Meanwhile, the critics lauded Em’s mediocre Marshall Mathers follow-up album The Eminem Show, full of empty vanity, forced, phoney politics and pompous 1970s guitar riffs, especially in famously “street” publications such as the Guardian. Maybe I’m just bitter because I feel betrayed, but it seemed that everyone wanted you to know how much they liked Eminem – and how cool, ironic and post-PC that made them. As a final confirmation of his total tiredness, his awesome over-ness, the tedious, toothless autobiographical flick 8 Mile (complete with a Be Nice To Fags public service announcement) which merely showcased his sullen, scrawny lack of charisma, saw the “new Elvis” being hailed now as the “new James Dean” on the front page of the rebel-loving hipster organ the Daily Telegraph. As a sign of the accelerated times we live in, the New Elvis had become the Old Elvis in the space of two years.

Oh, and by the way, Eminem, the voice of teenage angst, is actually 30. If you ever felt that Em was reminiscent of a Harry Enfield character, Nick Hasted’s biography will confirm your suspicions. Em himself seems to know that the Kevin-ish sullen stares, hissy histrionics and spiteful tantrums he has based his career on are essentially childish, and has been shaving a couple of years off his true age, like an ageing rent boy, for most of his career. Until, that is, his estranged mother – damn you, bitch! – “outed” his real date of birth recently. That’s the terrible thing about mothers: they are the original Women Who Know Too Much. No wonder he’s said he wants her dead.

Much as I’d like to be able to add Nick Hasted’s book ‘The Dark Story of Eminem’ (Omnibus) to the long list of embarrassing examples of molesting dad-culture rubbing up against Em’s “enormous pop culture talent” and “credibility”, it’s a largely clear-headed assessment of his career, his strengths and weaknesses, as well as something of an expose of the inevitable deceits this artist famous for reckless “truth-telling” has disseminated.

We learn, hilariously, that little Em was a quiet, shy, sensitive child who liked to colour pretty little pictures, which he would plead to be sent to his absent, deadbeat dad who never once attempted to get in touch with his son. As he grew up, an only child, Marshall’s rage ended up directed towards someone within reach: his single mother, Debbie Mathers-Briggs. As we all know, he has accused her, over and over again, of neglecting him. She denies this: “The real problem is not that he had a hard time, but that he resents I sheltered him so much from the real world… I was an over-protective mother who gave him everything he wanted and more.” It’s perhaps self-serving but quite convincing, not least because Em is still bitching and moaning about her neglect into his fabulously wealthy and famous thirties.

So when Mathers-Briggs recalls: “I got kicked out of stores because he’d be like the spoiled brat, lying in the aisle, arms and legs spread open”, it’s impossible not to cackle. After all, little Em managed to turn flailing and screaming about the world in general, and women in particular, not giving him enough attention into a spectacularly successful, attention-seeking career. In an early sign of his Springer-esque instincts, he has bragged how he would tape his mother throwing him out of the house to play to his friends to convince them “how crazy she was”.

Hasted, who did not have access to what Freud might have termed His Majesty the Baby himself, or his fractious family, has assiduously digested the clippings, piecing together a more consistent narrative than most of us have gleaned from the public slanging matches in the tabloids and in Em’s songs. Hasted also assesses the oeuvre, giving credit to Mr Mathers’ real talent, but also not quite letting him off the misogynistic hook with his “Ha-ha I was only kidding ladies, you know I love you” routine at the end of songs about butchering his ex-wife in cold blood in front of their daughter, and analysing his all-important, all-consuming relationships with the women in his life: his mother, his daughter Haille that Em keeps telling us he loves so much, and his ex-ex-wife Kim (since the book was written they are reportedly very much in love again and living together with Haille – the whole family admiring Em’s sweet “Kim: Rot in Pieces” tattoo over breakfast). My abiding impression is that, alas, Em doesn’t hate everyone, just women – and mostly because he is so pathetically dependent on them. Which isn’t exactly very special.

Hasted also visits Mathers’ home town of Detroit and discovers that Em’s background was not quite so white-trash as he has made out – more blue-collar and semi-suburban. Less productively, he spends rather a long time standing in the playground where a young Marshall was allegedly thrown by a bully head-first into a snowdrift (Marshall was a favourite target of bullies, and it’s easy to see why), re-imagining the seminal incident which prompted the song “Brain Damage” and caused Em to be hospitalised for several days. His mother apparently had to nurse him for many months afterwards. (Probably, it seems to me, another reason he hates her: bad enough to be of woman born once, but twice….)

In fact, Em’s fame appears to have been based on the murder not of ex- wives but of mommy’s little boy. Em’s first album, Infinite, now airbrushed out of history by Em, while critically well-received was apparently too sensitive, romantic and polite to be a commercial hip-hop success, especially with the suburban teen white boy audience who buy hip hop to piss off their nagging feminist moms and keep them out of their bedrooms. In other words, the don’t-give-a-fuck, mother-hating, wife-murdering, potty-mouthed – and smash hit – Slim Shady persona conceived (“while I was taking a shit”) after the failure of Infinite, seems to have been all about… giving a fuck.

There never was any Real Slim Shady.

2 Replies to “Eminem: His Majesty the Baby”