The Sun newspaper: Retro or Metro? 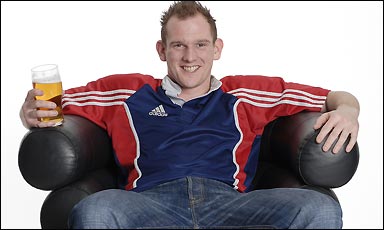 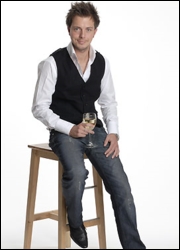 So, Cilla, which of our lovely lads is the public going to plump for?

Will it be ‘Dave’ the retrosexual PE teacher from Liverpool with a pint, who only uses aftershave his mum bought him for Christmas ‘on special occasions’ (but seems to be rather fond of hair product)? Or will it be ‘Joe’ the metrosexual Accounts Manager from Essex with a glass of Chardonnay and perched on an Ikea stool (I know where it’s from because I have one) who spends £350 a month on clothes and goes to the gym every evening because he’s going on a ‘lad’s holiday’ with fifteen mates and they’ve got a bet on for who ‘looks best on the beach’?

Yesterday’s Sun ran a ‘Hetero or Metro?’ competition, supposedly prompted by the popularity of the unreconstructed (and impressively ugly) sexist police character in BBC 80s ironic nostalgia drama series ‘Ashes to Ashes’. According to the Sun he makes women ‘quiver’.

Probably because a) he’s safely in the 80s and b) they can’t smell him.

For just 10p you can cast your vote for the ‘hetero’ or the ‘metro’. (It costs nothing to show them your indifference.)

One of the many ironies of this exercise is that ‘Joe’ their sportswear clad ‘hetero’ ‘real man’ looks a lot like a lot of gay men these days, especially the ones you find in Central Station or in Triga videos. But then, after all, he’s a PE teacher. Are any of them straight?

Because the Sun is, like the rest of the media, part of the metrosexual consumer conspiracy, the competition is of course men-daciously loaded in favour of the retrosexual (bigger picture, first billing, biased intro).

In case you needed reminding that actually there’s no contest and that, whatever it pretends, the Sun is really rooting for metrosexuality, today’s paper has a male workout spread giving advice on how men can look good on the beach, or in underwear ads. A spread aimed very much at ‘Joes’ – who, of course, have more money and neuroses to spend than PE teachers from Liverpool. Even the Soaraway Sun’s family holiday guide in the same edition are illustrated with a scrummy ‘daddy’ with perfect pecs, skin, hair and teeth.

Whatever the outcome of the poll, Joe has already lost.

But the triumph of metrosexuality is not without rather queer contradictions and ironies. In the very same edition of the Sun, a news story tells of a gay BMW salesman taking his former employers to court for harassment and humiliation over his sexuality. Amongst his claims is that when he wore a pink shirt to work male colleagues jibed ‘Hello sweetie!’. Rather than reprimand them, his boss sent him home to change his shirt – whereas the same colour shirts worn by his straight colleagues went unremarked.