Who’s the Diva? Hillary or Obama? 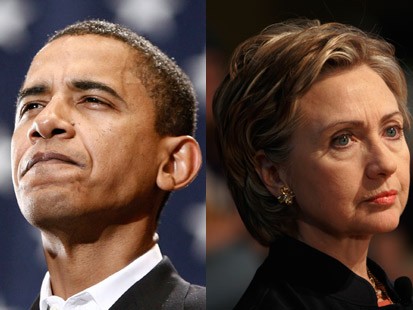 As camp comic Kenneth Williams might say: ‘ark at ‘er!

An entertaining, often incisive, if rather, er, campy, Huffington Post article ‘The Diva’s Camp’ about Hillary’s diva power (and why this turns off ‘Obama-colytes’) compares Hillary Clinton to Joan Crawford in Mommie Dearest:

‘Hillary Clinton is possessed by the spirit of Joan Crawford. Like that notorious über-bitch immortalized by Faye Dunaway in the camp classic Mommie Dearest, Hillary bulldozed into a Democratic primary dominated by men and brazenly declared, as any self-respecting diva would: Don’t fuck with me fellas! This ain’t my first time at the rodeo!’

Now, that’s funny, but where did I hear that before?

Oh, yes, that was me a month ago talking about the “3am” ad in a piece after her Ohio comeback called ‘The Bitch is Back’ on Guardian Unlimited:

‘…Hillary answering the White House phone in scarlet lipstick, has both a touch of 1990s nostalgia, and also one of timeless thrilling glamour – a hint of Joan Crawford talking to the board of Pepsi in Mommie Dearest: “Don’t fuck with me, fellas – this ain’t my first time at the rodeo!“‘

Even though I hear that Guardian Unlimited is quite popular in the American blogosphere, I’m sure it was just a case of diva-revering minds thinking alike. And I very much doubt I’m the first person to compare Hills to Joan.

Actually, though, we weren’t really thinking alike. Despite my comparison when discussing the ad, I don’t think that Hillary is possessed by the spirit of Joan Crawford, or is camp as a row of tents full of impossible divas on the blob. Apart from anything else, camp isn’t really possible in a world like the all-singing, all-dancing shameless one that cavorts and disports itself before our jaded eyes these days.

Everything and nothing is camp. Including the Huffington Post. More to the point, to talk about Hillary as being ‘so camp!’ seems to argue, whether intended or not, that the notion of a woman as the most powerful person in the world is merely ‘failed seriousness’. Or a joke.

And this is a very serious business. Medically serious. Sometimes it looks as if the Democratic Party is having a gigantic nervous breakdown over the idea of Hills as their ‘man’, or, rather, over the ‘arrogant’, ‘hopeless’, ‘divisive’, ‘ugly’ idea that she thinks she could be rather than Mr Obama. It’s tangibly Oedipal.

Despite that, I do believe that America is slowly, slowly, very, very tortuously, negotiating the five-alarm idea of having a ‘bitch’ and ‘cow’ and ‘whore’ and ‘c**t’ – to use the progressive, uplifting, non-partisan vernacular of righteous Obama fans – as Commander in Chief. America will learn not to cross its legs and whimper when Hillary is on TV, even if MSNBC’s Tucker Carlson doesn’t.

After all, Hillary has almost all of the crucial big states, and if the Democrats used the same first-past-the-post electoral system used during the Presidential contest itself, she would be well ahead of Obama. Contrary to what the media likes to tell us, she’s anything but Box Office Poison.

Perhaps because it attracts insecure men keen to big themselves up, it seems to be mostly the US media that’s having the nervous breakdown. The more than slightly deranged and hysterical – certainly much more deranged and hysterical than she is accused of being – nature of the press bias against Hillary and the extreme, frequently all-but murderous personal abuse casually levelled at her,compared with the loving, swooning indulgence bestowed on her stripling rival, does rather suggest that anxiety about a female Big Boss, thus far at least, looms and lurks much larger in their minds, than a black (or, rather, half-white) male one. This isn’t to say that ‘sexism is worse than racism’, it’s just to point out that sexism – no, sorry, untrammelled, uninhibited, shuddering, shivering, gut-wrenching misogyny – unlike racism, is considered perfectly acceptable prime time fare.

And as somebody who isn’t entirely free of misogyny myself, I think it terribly unfair that they should be able to get away with it.

Sometimes, watching the American Primaries coverage has been like watching an especially horrifying episode of 60s retrosexist drama Mad Men, but without the irony or the smoking.

In her bitter battle to win this unconscious – and therefore by definition unfair – struggle, Hillary is using every powerful American feminine archetype she can lay her hands on. Unfortunately for her, there aren’t too many. Unlike our first female leaderene Mrs T (whom America loved, partly because she was, like Churchill, and Tony Blair, great at giving America head, but mostly because she wasn’t their leader), she doesn’t have chariot-driving Boudicca or Armada-vanquishing Elizabeth I or globe-ruling Victoria to call on as legitimising ancestral memories.

Because of the vital symbolic importance of these women in our national mythology, or maybe just because of Coronation Street, the UK is sometimes rather more matriarchal than the US. Elton John, who admittedly is not perhaps the best argument for matriarchy, recently announced himself shocked by the misogyny America has displayed during these Primaries.

Republics and their ‘Founding Fathers’ favour women even less than monarchies. Monarchies, which are after all based on reproduction and families, occasionally cut them a break, when no worthy male heir turns up – which is what happened with the Tory Party in the 1970s when it anointed Maggie. Though if she had used the famous line of Elizabeth, “I know I have the body of a weak and feeble woman, but I have the heart and stomach of a king, and of a king of England too,” everyone would have scoffed at the idea that her body was ‘weak and feeble’. Even her famous handbag was seen as a fearsome weapon.

Powerful women in American history, save perhaps Eleanor Roosevelt, don’t really exist – except as kindling in Arthur Miller plays. So they had to be imagined in 1940s Hollywood melodrama, aimed, of course, at powerless women: producing, literally, ‘divas’ such as Joan, Bette and Katherine. So if Hillary sometimes channels a little bit of Joan, Bette and Katherine it’s because she needs to imagine herself as a powerful woman in a man’s world, and American history doesn’t offer her much else to work with.

Handsome half white/half black but entirely male (if very eager to please) Obama can and does draw on both Martin Luther King and Jack Kennedy, and in fact American political history at least as far back as Lincoln for his legitimation – and invites us, with that sexy smile, to a ‘more perfect union’. It’s an invitation that, oddly, seems to turn men on more than women. Hillary hating MSNBC’s Chris Matthews, for instance, talks openly about how how listening to Obama gives him ‘a thrill up my leg’ (a very different kind of feeling, I’m guessing, to that experienced by Tucker Carlson listening to Hillary). Lots of guys are gay for Obama – and out and proud it seems.

And as for Hillary being a ‘gay icon’, despite gay parade marching Hills being closer in many ways to the gay community than Obama, and despite (English) Elton John’s support, most American homos I know can’t bear her, while the main gay blogs practically dance on her head daily. Preposterously bearded MTM transsexual and recovering Republican Andrew Sullivan is completely obsessed, practically screaming ‘DIE, BITCH! DIE!’ at her, calling her a ‘horror movie without end’ and comparing her to Glenn Close’s insane stalker character in the infamous 80s career-woman hating flick Fatal Attraction. Get a grip, Mary. And a shave.

Despite Mr O’s reluctance to be interviewed by the gay press or attend gay parades, his Christian church base, and his gay platform vagueness, he is much the ‘gayer’ candidate simply because he is younger, better-looking, better-dressed, cooler – and male. He is, in fact, metrosexual.

If we are going to talk about camp, and if camp is a form of style over substance, mediagenic Obama is much camper than Hillary – and more of a diva too. Doesn’t he roll his eyes during debates with Hillary? Doesn’t he fill stadiums with his performances? Didn’t he flounce out of a press conference in which he was actually grilled instead of applauded in a huff, protesting ‘You’ve asked me like, eight questions already!’‘.

It’s the male divas you have to watch out for in politics. Over here in the UK we are still getting over our own Christian pop star politician, that nice Mr Blair who took us, smiling his drag queen smile, into a disastrous American war.

5 thoughts on “Who’s the Diva? Hillary or Obama?”