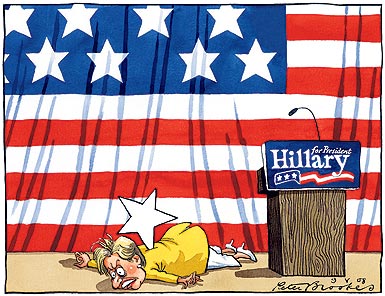 God, but they hate her. Really, really hate her. They hate her so much they want her dead. And it’s gone way past a bloody metaphor.

Not most Democrat voters, of course, who have given her at least as many votes as Obama, (and though many Obama fans hate her passionately, religiously, a surprising number don’t actually have it in for Hillary). No, it’s the traditional media and the blogosphere that are driven, pretty much unanimously, into a murderous fury by Hills.

Last week after her slim victory in Indiana and Obama’s large one in North Carolina, both of which were pretty much as predicted, the media, as if on some pre-arranged signal, treated this as big, front page, defining moment news, all agreeing that she was ‘Finished’. ‘Toast’. ‘Over’. ‘Dead in the water’. ‘Done’. ‘Washed up.’ The powerful Senator for New York was headed for ‘Oblivion’. Ding! Dong! The witch is dead!

The London Times op-ed page cartoon last week (above) by Peter Brookes graphically/gratifyingly illustrated the Hillarycidal tendency by showing That Woman – finally! – face down, dead, speared in the back by a star from the American flag. Hurrah! America strikes back! Like most satirists, Brookes has gone to town on Hillary from the beginning, portraying her as a spiteful, hideous hag and harridan – which is his job. But, again like most satirists, and most journalists, he has found himself strangely unable to do his job when it comes to Obama: his caricatures are more like loving portraits, or religious icons. Reverse the roles and put Obama the black man in Hillary’s position, face down with an American State in his back, and the cartoon becomes utterly inconceivable except as a comment on American racism.

When Hillary had the effrontery to fail to comply with the media’s universal death sentence last week, and, instead of lying down dead on the ground, remained very much alive and well and carried on campaigning strenuously, they tried the ‘Hillary enters death-with-dignity phase’ angle. Or talked about how she’s only staying in the race because she’s ‘after money’. Or ‘campaigning for 2012′. Or how she was just ‘mad’.

And then this week, Hillary wins a huge victory in West Virginia, handing Obama his biggest defeat of the Primaries – not bad for a corpse. Though you might have missed it, because most of the media tried to bury the inconvenient Hillary-Lazarus story. If it covered the West Virginia landslide at all it was usually in the form of asking whether ‘racism’ was at the root of it. A question which it curiously failed to ask when Obama won 90% of the black vote in North Carolina, but which it now asks repeatedly whenever Hillary wins. Obama you see wins because he’s a good candidate and because black people are good people who recognise a good man when they see one; Hillary wins because she’s a desperate candidate and working-class white people are stupid and mean and… low-class.

The unanimity of the (educated, well-heeled, liberal, overwhelmingly white) media class is such and has been for some time now that you might be forgiven for thinking that some of them would feel uncomfortable with parroting one another. But then if you did, you’d be underestimating the gutless, herd-like nature of the media class.

Besides, they’re defending their interests as a class.

Why does the media class hate Hillary so viscerally and want her dead? Partly because her main constituency, the white working class, is the only group they are permitted to look down upon – and boy, do they. By accusing the white working class of being racist, which is a charge that seems to easily trump classism and sexism, they are really accusing them of being ignorant. Which they obviously are, since they don’t vote as instructed by the Fourth Estate – who know better than the electoral backbone of the Democratic Party what’s best for the Democratic Party. The shocking nakedness of the media’s bias against Hillary and her supporters is deliberate – it’s meant to demonstrate their moral and class superiority.

But the main reason why the media’s Hillarycidal fury is so extreme and so universal this time around is because they told us she was ‘dead’, ‘finished’, ‘over’, several times before – and she proved them very wrong. Repeatedly.

So she must DIE. They really want to wipe her out – not just because she proved them wrong, after all, it’s their stock-in-trade to be wrong, but because she has succeeded in conducting a campaign without their permission. That represents an intolerable challenge to their authority. How dare a politician in the 21st Century in the most advanced, most powerful country in the world carry on winning elections without the support of the media or the blogosphere? Who the hell does that bitch think she is?

Hillary’s chances of winning the nomination are certainly not, as the media class keeps telling you – and has been since February – non-existent. But they are very slim. And I make no claim, from this side of the Atlantic, in one of the US’s military satellites currently at war in Iraq and Afghanistan, to know who would make a better President of the United States – even if I think it crystal clear which one has a chance of actually beating the Republicans who embarked on those wars (clue: the one who keeps winning the big swing states).

But I would love for Hillary Clinton to win the Nomination for one reason and one reason alone. To force the media class on both sides of the Pond to choke on its hideously unattractive Hillarycidal hat.