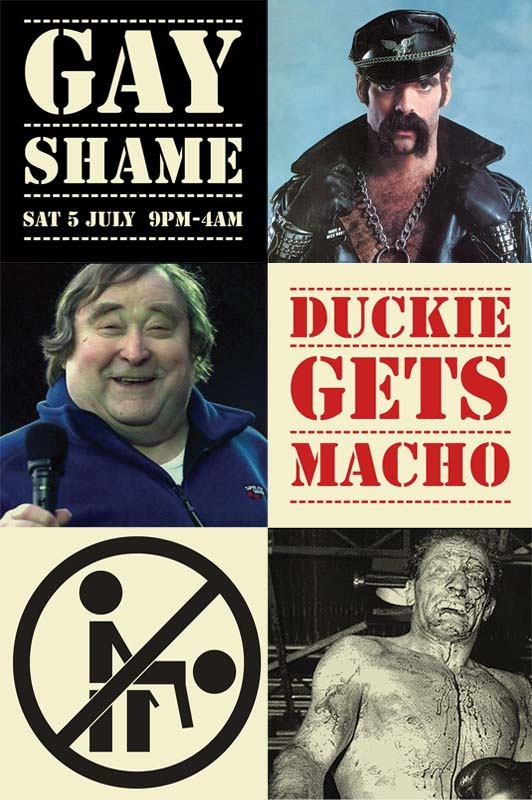 Ever with its middle finger on the cultural pulse, this year, Gay Shame, the Duckie collective’s artsy alternative to the pink poppered-up roller-skating jollity of Gay Pride, has this year decided to go retrosexual.

But unlike the mainstream appropriation of retrosexuality – e.g. those tiresome cloney beards all men, straight and gay, have to accessorise these days – Duckie’s, held this Saturday night at The Coronet, Elephant and Castle, South London, is being done with a rather keen sense of irony and parody.

It also sounds a hoot.

On Gay P**de night 2008 it’s time to make men pay. Collect your wad of nine bob notes on the door and spend them in the market place as Duckie turns consumers into real men.

It promises over 30 stalls that ‘test your masculinity’, including:

Now that’s what I call a night out. And no expense has been spared, apparently:

…designer Robin Whitmore turns The Coronet into an interactive nightclub-theatre with the aesthetics of a giant fucking mini-cab office: sticky, brown, stained, a bit pongy and distinctly lacking a feminine touch.

Maybe though they could have saved Robin the trouble and stayed at the Vauxhall Tavern, Duckie’s venerably pongy venue on Saturday nights….

Hosted by Amy Lame, a panoply of stars familiar to Duckie regulars will be performing, including Justin Bond, Marisa Carnesky, Susannah Hewlett and Chris Green – all sound-tracked expertly as ever by The Readers Wifes.

If you’re thinking of having a gander and a flutter please note the dress code:

It’s not yet clear whether Guy Ritchie’s butch lesbian will allow him to attend.