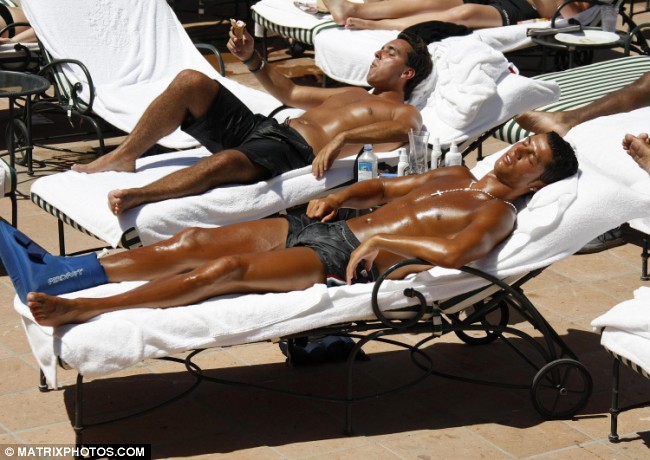 “‘Ere, Ron – The Sun want to know if you’ve got any smaller shorts?”

Britain’s best-selling newspaper The Sun has been working itself into a confused lather about our metrosexual footballers, again. Like me, it just can’t leave them alone.

In a long, hand-wringing – and graphically illustrated – article spread over the centre pages last Friday headlined ‘Preen Team’ they ask ‘What the hell is going on with our footballers?’

Led by the Premier League’s arch-metrosexual Cristiano Ronaldo, football has this summer gone camper than a row of tents.

This week Ronaldo continued his holiday tour by hanging out in a pair of tight silver shorts in LA – and had the world’s gay men coming over all funny.

Er no, it had The Sun coming over all funny. For much of the summer, The Sun has been stalking Portuguese Ronaldo, the best footballer in the UK and also one of the best looking, who is currently convalescing after an injury (hence the unflattering blue footwear), trying to exploit his current unpopularity – the result of his plans to leave Manchester United for Real Madrid, and his failure to keep them, like his hot oiled bod, under wraps.

Like a jealous, spurned suitor, The Sun (along with most of the Brit tabloids) has been bitching and beating him up over his dark (Portuguese) tan, his shorts, his good looks – and his lack of apology for them. And trying to imply he is girly and, what is the same thing in their book, homo.

And who can blame him for wanting to leave the UK, where the biggest paper behaves like a school-ground bully with sexual identity issues? They’ve even published pictures of him smiling at a mate (who appears to be his brother), telling us that he’s cruising him. And I thought I had bumsex on the brain.

In a familiar trick, they’ve given space to the editor of ‘Britain’s best-selling gay magazine’ to gush about what a ‘gay idol’ Ronaldo is. Otherwise known as guilt by association. At the same time as proving they’re ‘not homophobic’ because they let the king of poofs have his say.

Friday’s article goes one step further and seems to blame Ronaldo for making an entire generation of footballers gay. I know he has nice legs, but I doubt even those pins have that kind of power.

But a perfectly-waxed chest and budgie smuggling shorts are just the tip of the iceberg.

A sun investigation has found the manbag and grooming obsession is rife among our highly-paid stars.

As you may have suspected, it turns out that this ‘investigation’ is just another excuse for lots of pics of young footballers without much on. An excuse even smaller than Ron’s silver shorts.

Though I can’t help but poke fun at The Sun‘s hissy list of the metrosexual offences of our footie aces:

(Which we’ve Photoshopped to make look even pinker and gayer, just as we’ve done with Ronaldo’s tan to make him look even darker and even more of a girly dago.)

He has also been lugging around wife Elen Rives’ fuchsia handbag.

I think it suits Fabulous Frankie and he should nick it off her.

Italian World Cup winner Fabio Cannavaro actually SHAVED his mate’s chest and armpits on the deck of their holiday yacht this week in a show of shameless male bonding.

Actually SHAVED his mate’s chest and armpits? No! Well, I never! The shamelessness of it!

And Liverpool and Spain striker Fernando Torres spent most of last month by the pool with an Alice band in his hair while leafing through lifestyle magazines.

You can bet he wasn’t reading The Sun.

Ah, for the days of football when men were men and soap was never scented – or dropped. Right on cue The Sun wheels out 1970s footballer Ron ‘Chopper’ Harris, to whinge about how in his day he got paid ten bob a week, cut his own hair with garden shears, ate gravel, and beat up poofs on sight (or so you’d be forgiven for thinking). Interesting that The Sun didn’t ask retired ‘hardman’ Neil ‘Razor’ Ruddock back to play this role, after he failed to deliver the poof-baiting goods in a recent previous Sun article bemoaning the gayness of today’s football.

How The Sun loves to keep coming back to this theme of metro V retro, pretending of course to be on the side of retrosexuality against, well, homosexuality. Partly this is because it imagines that retrosexuality is synonymous with ‘working class’ – traditionally the majority of this tab’s readership – because The Sun is now edited by expensively educated types who are faking it.

By posing as champions of ‘Chopper’ Harris they present themselves as connected to that stoic proletarian tradition they actually have nothing to do with, and today’s consumerist, sensual, closetted metro Sun is a million fake-tanned miles from.

I suspect readers under the age of 30 that they know they desperately need to attract if they are to have any future at all, let alone continue to sell millions every day, are mostly turned off by this confused and conflicted metrophobic bullying, however jokey it’s presented as being. Especially those from a working class background. Why? Because they will probably see it as directed against them.

When repeatedly adopting this kind of cor, strewth, look at the pooftahs footballers are today! tone, The Sun just sounds like their nightmare fat dad.

Intentionally or not, this time the space given to the editor of Attitude to twitter about fashion and male freedom and footballers showing the way makes that gay mag sound much more in tune with younger Sun readers than The Sun itself.

From Sportsmen to Sporno Stars