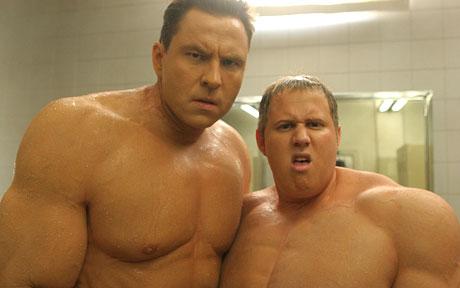 ‘What other culture could have produced someone like Ernest Hemingway,’ waspish bisexual American exile Gore Vidal once asked of America’s favourite so-butch-he’s-camp writer, ‘and not seen the joke?’. The answer, was, of course, that only a culture that couldn’t see the joke could produce a Hemingway.

I don’t know whether Matt Lucas and David Walliams read Vidal or Hemingway, but in Little Britain USA, the recently launched HBO spin-off of their hit UK TV comedy sketch series (which is also airing on BBC1), they seem to be posing that question again – though this time the answer has some bearing on the likelihood of Stateside success of their show. In Little Britain USA ‘Our Boys’ (as a cheer-leading UK media seem to have tagged the camp duo) have put their probing finger on one of the most ticklish fault-lines of US culture: how ‘gay’ big butch God-fearing America can seem – and how comically in denial of this Americans can be.

There certainly seems to be a bit of Hemingway, who loved his guns, in the moustachioed cop (played by Walliams) who gets a visible hard-on while demonstrating his impressive collection of weapons to his fellow officers. But it’s in the steroid-scary shape of the towel-snapping ‘Gym Buddies’, Tom and Mark, who like to take long showers together after pumping iron, and graphically re-enacting what they did to the ‘pussy’ they pulled last night – with each other’s huge latex bubble-butts and tiny penises – that the so-butch-it’s-camp not-so-hidden secret of American culture is graphically outed by Little Britain USA.

Along with pathological denial. In last week’s episode, when an alarmed bystander glances nervously at them humping naked in the locker room they retort: ‘Whaddyou lookin at? Are you A FAG??’  Walliams, who is so camp he’s almost butch (a ladies’ man off-screen he has been described repeatedly by the UK press as ‘the ultimate metrosexual’), seems especially proud of the Gym Buddies sketch – describing it as ‘possibly the most outrageous we’ve ever done’. Certainly it’s drawn most fire from critics in the US, who have given the series very mixed reviews.

Lucas and Walliam’s gleefully amoral queer sensibility – they’re basically drag queens on a revenge trip, especially when they dress up as men – was always going to be difficult for America to swallow. But touching Uncle Sam up in the locker room may well make it a lot harder… er, I mean, more difficult. America, even that part of it that watches HBO, may not want to get that joke. Especially when made by a couple of faggy Brits. And by the way, while we over here might think American butchness tres gay – e.g. the locker-room and volley-ball scenes in Top Gun – all Europeans look ‘faggy’ to Americans, especially us Brits. The sketch featuring Walliams as a flaming Brit Prime Minister trying to get into the straight black US President’s pants probably won’t offend as much as Walliams hopes since most Americans thought Tony Blair was gay anyway.

Rather sweetly, compared to the UK, America is a country where masculinity and machismo is still sacred – despite having done more than any other country to make it obsolete by inventing men’s shopping magazines. In the US of A, it seems, anything masculine can’t be gay and vice versa. Hence Hummersexual Tom and Mark. Hence ‘Don’t Ask, Don’t Tell’. And hence all that fuss the US made over that mediocre gay cowboy movie Brokeback Mountain which, when it arrived in the UK, promptly bored everyone senseless.

America’s love of the masculine body, is gloriously ‘gay’ – or, more accurately, homoerotic.  But alas, until now Uncle Sam has been terribly ashamed of his natural, red-blooded and blatantly bloody obvious bi-responsiveness.

Only America, God Bless, could have produced UFC, a hugely popular pay-per-view ‘full-contact-sport’ that involves two young muscled men in shorts trying to get each other’s legs around their ears (Tom and Mark probably watch it together – in their UFC shorts). Only America could produce a best-selling men’s workout magazine like Men’s Health, put men’s pumped tits and abs on the cover every month and strenuously maintain the pretence that none of its readers are gay or bisexual – or even metrosexual. Only America could produce a film like last year’s ‘300′, essentially a toga-themed Chippendale flick for teen boys – but because it was made for American teen boys its denial was even more preposterous than its pectorals: the baddie had to be a big black club queen in a spangly Speedo.

Mind you, ‘300′ had at least one virtue, albeit unintentional: it was rather funnier than Little Britain USA. Perhaps the biggest problem Walliams and Lucas face in ramming their sensibility down Uncle Sam’s throat isn’t America’s gay denial or gagging reluctance to see the camp joke, but simply the fact that, on the basis of the first couple of shows, their American ‘outing’just isn’t very funny.

Either side of the pond.