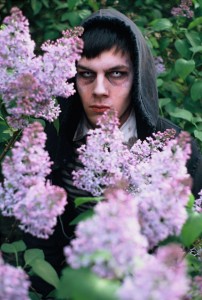 The credit for ‘Director’, of course, could only be ‘Bruce LaBruce’. Otto; Or, Up With Dead People, a gay zombie movie with a beating if not actually bleeding heart, is the cult Canadian filmmaker’s latest outrageous offering. After assaulting us with Red Army Faction sex terrorism in The Raspberry Reich (2004), and queer neo-Nazi skinheads in Skinflick (2000), LaBruce outdoes himself in Otto, gnawing at our entrails with the affecting story of a sensitive young zombie looking not so much for flesh as for soul in our deathly, post-porn, Crime Sheen, Nip Fuck culture. Instead our undead pretty protagonist finds himself trapped in a film within a film, starring in an agit-prop doc directed by an impressively bossy German lesbian film director determined to put the world to rights – or at least give it a good spanking.

————
Mark Simpson: I think congratulations are in order Mr LaBruce. This may be your best work yet. It’s certainly your most romantic. Funny that it should be a film about flesh-eating, gore-humping zombies that brings that out in you…

Bruce LaBruce: Well, I think if you examine my oeuvre Mr Simpson you will find that I’ve always had a strong romantic streak. But because I often deal with slightly outré subject matter-neo-Nazi skinheads, pornography, amputees, would-be terrorists-people sometimes have a hard time seeing it. But actually, characters who are disenfranchised, ugly, or marginal often have a strong sense of the romantic: it’s all they have. Otto is so sensitive to the cruelty of the modern, corporate-controlled world that he has literally deadened himself to it. There’s something very tragic and romantic about that. Medea Yarn, the stylish lesbian filmmaker who makes a documentary about him, romanticises death as a way of coping with the injustices of life.

MS: True, you’ve always been an incurable-adorable romantic, but OTTO really wears its half-eaten heart on its sleeve. By the way, the footage of mechanised death and carpet bombing projected behind Medea as she lectures us about death being the new pornography was totally hot. Where do I find some more of that?

BLB: Just turn on your TV. I looked through a lot of stock footage and it really did strike me how the media packages war and disaster footage as entertainment. And if I see one more poster of Angelina Jolie, our supposed Earth Mother, with her emaciated body and huge breasts, holding some over-sized, phallic automatic weapon, I think I’ll turn into a zombie and start feeding on road-kill!

MS: She’s upfront all right. Speaking of voyeuristic fascination, I found the zombie sex scenes in the abandoned fairground most poignant. Part time-lapse nature photography, part social documentary, they reminded me of my misspent youth on Hampstead Heath.

BLB: Or our other fearless champion of public sex, George Michael! Like I always say, if you’ve ever cruised a park at night, or a public toilet or bathhouse, it really is like Night of the Living Dead! There’s something exciting about that somnambulistic state you go into when cruising for sex: the anonymous and interchangeable body parts. But there’s something a little sad and melancholy about it too-the loneliness and desperation.

MS: Yes, and that’s the best part. Can I just say, in case anyone unaccountably suspects me of only being interested in boys’ bits, that Katharina Klewinghaus, who plays the fabulously strident Medea and Susanne Sachsse, who plays her silent film-star girlfriend Hella Bent, give unmissable performances .

BLB: Thanks! I think Medea and Hella are one of the great cinematic lesbian couples, if I do say so myself.

MS: They are. But then, I think you’re one of the great lesbian directors.

MS: I think you may have turned me too. I fell hopelessly in love with Hella. Presenting her as a full-time silent film starlet, mute and ghostly in split-screen black and white, emoting to camera and communicating only via flash cards – while Medea rants on in full colour – was pure genius. Is she a comment on ‘silent’ lesbian partners?

BLB: Ha! I never thought of that! The silent lesbian partner! I like it! She’s like Alice B. Toklas to Medea’s Gertrude Stein! Maya Deren was a major inspiration-she was a great avant-garde American director whose films were all silent. It also made sense to me that Medea, totally devoted to cinema, would see even her own girlfriend as a film genre!

MS: She’s my girlfriend now. I want to see a whole movie starring Hella. I insist you start filming immediately.

BLB: That’s funny, because my husband, to whom the movie is dedicated, also thinks Hella steals the movie. I have a big soft-spot for Otto as well, though. As an alienated, hypersensitive gay youth who shuts himself off from a violent and homophobic world, he represents how I felt as a teenager. I cast eighteen-year-old Jey Crisfar as Otto because I could tell from his MySpace page that he had that damaged, almost neutral quality of modern youth.

MS: Sensitive gay youth? Aren’t they drowned at birth these days? How are they going to become snappy style gurus or bitchy gossip columnists if they’re sensitive? Let alone perpetually-lubed fuck-machines. Which reminds me, do you ever use a casting coffin?

MS: I’m sure that will disappoint a lot of wannabe Bruce LaBruce movie stars. Why do you think that modern youth have that damaged, almost eviscerated quality? Do you see it in yourself at all?

BLB: I think we live in very dark and cynical times. Corporate entities control our lives and a militarized police force clamps down on any protest or dissent, while advanced capitalism, with all its technological diversions, endlessly distracts children from what’s really going on in the world. I think we all suffer from it but today’s youth really have never known any other, more autonomous reality.

BLB: Anyone who has been involved in the extremes of sex in the gay world recognises that there are few limits. That is one thing that really still separates the men from the boys, and the gay world from the straight world. Like any extremes of experience, you have to learn how to balance that pursuit with your general well-being, to balance the pleasure principle with the reality principle. It’s a simple rule for kids to remember!

MS: Is it something you’ve managed to achieve in your own life, Bruce?

BLB: It’s a constant struggle! As I get older I find it harder to allow the pleasure principal to be as free-wheeling. But I don’t want to be ‘mature’ – I think you can still be a rabble-rouser when you get older. I look to the example of people like William Burroughs or Edward Albee.

MS: No wonder you’re a mess! I can talk though: I don’t seem to be able to get a handle on pleasure or reality. But hang on, you mentioned earlier that this film is dedicated to your husband. That sounds like Bruce settling down!

BLB: I don’t like to talk about it much, but my husband is Cuban and, although we are very much a couple and have been for some time, I married him mostly because otherwise he might not be able to stay in Canada. Of course, I’m ideologically opposed to gay marriage, but I don’t allow ideology to get in the way of practicalities. Besides, I like to contradict myself at least twice a day. Having said that, we were married at City Hall in front of a about thirty friends, and there wasn’t a dry eye in the house! I read the lyric of Gershwin’s Our Love Is Here To Stay, and the officiating Justice of the Peace, a spritely Irishman, read, of his own volition, from Whitman’s Leaves of Grass!

MS: I knew you’d gone all mushy inside, Bruce. But I think if I’d been there even I would have cried too – loud enough to wake the dead.