You may remember I couldn’t resist poking fun a while back at Canadian Club’s ‘Your Dad Wasn’t A Metrosexual’ poster, the one with with the tag line ‘Damn Right Your Dad Drank It’.  It turns out there were several instalments in that faux retro campaign, including ‘Your Dad Never Tweezed Anything’, the very appetising ‘Your Mom Wasn’t Dad’s First’, and the positively lipsmacking, ‘Your Dad Had a Van For a Reason’. (I kid you not.) 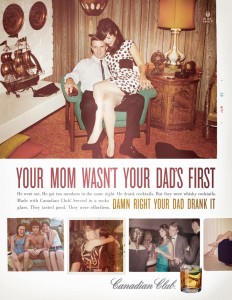 It appears that the campaign received some bad press in Canada, and I wasn’t the only one that couldn’t resist sending it up.  Fresca has kindly drawn my attention to this project by Michelle Koenig-Schwartz in which she invites people to creatively deface the ads – the ‘Your Mom Was Your Dad’ poster below is one of the contributions. Others include a picture of two naked twinks snogging under the headline ‘Your Mom Wasn’t Your Dad’s First.’  I’m not sure that I share the sense of outrage that some people seem to have over the ads, but they were certainly asking for a good kicking. 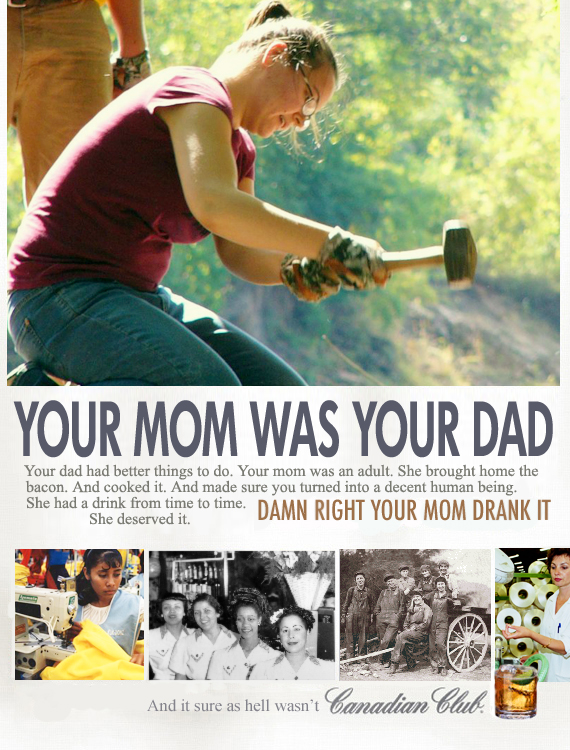 Which makes me wonder whether all this attention might well be exactly what the wannabe Mad Men at the ad agency responsible wanted – the ‘Damn Right Your Dad Drank It’ campaign has apparently begun again, with posters announcing, ‘Your Dad Didn’t Wear a Bridge’. Whatever that is supposed to mean.

But it’s always fun defacing ads, so what the hell?

The Magic Position by Patrick Wolf

Twinsome Devils and the Narcissus Complex