Mark Simpson on those big scary rings at the movies

You might think me obsessed with men’s bottoms. And you’d be right. But if you want to know what a real bottom obsession looks like, one that makes my own heavy breathing look positively flirtatious, just visit the movies.

Take the Summer blockbuster Independence Day (written and directed by Roland Emmerich). Here’s a film so fixated on bumholes that it can’t see anything but bumholes. Bumholes so big and special-effected that they threaten to swallow up the whole world.

In this startlingly excremental (figuratively as well as literally) movie, American civilisation is dwarfed by vast, round alien arseholes which saucily position themselves over the biggest, proudest, pointiest buildings in New York, LA., Washington etc. After twenty-four hours of teasingly hovering above these phallic monuments, they open up their sphincters to dump a stream of shit-from-hell which first demolishes the skyscraper below and then engulfs, destroys and generally wreaks havoc on the nicely ordered American metropolis beneath it. That’s some bottom.

In case we’ve missed the point, the gung-ho US pilots who attempt a counter-attack talk a great deal about how they can’t wait ‘to give it to those aliens up the ass!’ However, they fail to penetrate the aliens’ defences with their hot, hi-tech rockets – even the nuclear-tipped babies – because the cheeky Pushy Controlling Bottom aliens have a force-field hymen protecting them from such unwanted attentions.

Fortunately, wily Jeff Goldblum saves the day and mankind’s reputation as fuckers not to be fucked with, by craftily working out that what is needed to lower the aliens’ defences is a virus. Jeff infects one of the smaller alien vessels and thence the mother vessel by ‘docking’ with it, and soon the virus is transmitted to all the alien ships, whose force-fields/immune systems collapse.

This allows Randy Quaid, playing a kamikaze love-missile, to fly up the sphincter of an alien vessel opening to crap destruction on a city below, while shouting ‘ALIEN ASS-HOLES!! UP YOURS!!’, before exploding and destroying the alien ship, helpfully showing the rest of the Earth forces ‘Where the aliens’ weak-spot is.’ That is to say: in the same place as men’s. 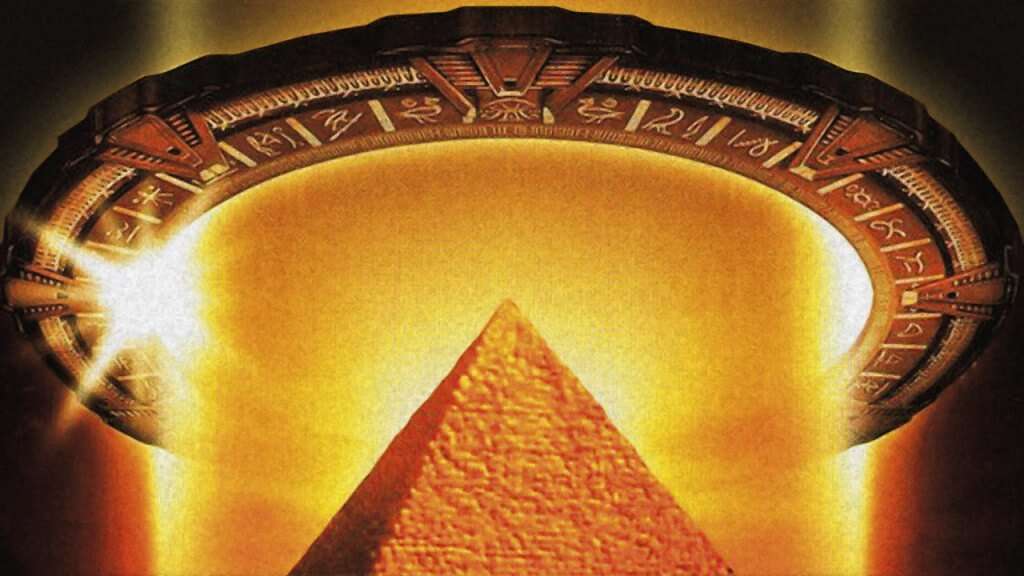 Men’s bottoms are officially meant only to allow one-way traffic, any reminders that it can admit as well as expel tend to make men uneasy – unless they can be projected onto something hated. Stargate was a movie which begins with the discovery of a huge ‘ring’ in the Egyptian desert which turns out to be a ‘portal’ to other worlds – which is fine and dandy. But it is also a point of entry to our own – which isn’t. So commander Kurt and his men are dispatched to plug that hole good and proper and protect Earth Men’s virtue.

As film star Mel Gibson made clear in an infamous interview where he was asked about whether he worried that people might think he was a homosexual because he was an actor, the possibility of two-way traffic in the region of your own posterior must be denied. Pointing to his not uninviting arse he allegedly shouted: ‘This is for shitting; nothing else!’ All the same, it’s just a little odd that his hard, manly, hairy performance of Scottishness in Braveheart against the soft, smooth, nancy-boy English reached its climax in a scene where he was publicly disembowelled by the Sassenachs without so much as blinking.

The ending of Stargate also owed something to recent American history: A T-shirt popular with US forces during the Gulf War, depicted Saddam Hussein – that other scary despot the yanks liberated desert people from – bent over with an American missile up his butt and the legend beneath it reading: “WE’RE GONNA SADDAMIZE YA!’

The direct representation of male violation, like consenting male homosexuality itself, used to be a taboo; in the Seventies the play Romans in Britain was prosecuted for indecency because it featured a simulated male rape scene (defended, interestingly, as being ‘a metaphor for imperialism’). John Boorman’s film Deliverance (1972) was considered ‘controversial’ because it hinted rather heavily at male-male sexual assault. Nowadays, however, in the arsehole-anxious nineties, male rape scenes are practically de rigueur in mainstream movies, popping up (and being held down) in films such as Pulp Fiction (1994) and The Shawshank Redemption (1994), while, as we’ve seen, the theme of forced, vengeful posterior penetration has even become the stuff of science fiction movies ostensibly aimed at kids.

This might just have something to do with the rising visibility of homosexuality and the increasing fascination with male passivity – along with the inescapable fact that, no matter how many aliens the guys blow away at the movies (and in Stargate and Independence Day saving the world is strictly a guy thing) they still keep losing the sex war with the aliens they live with. Females.

So, without wanting to come over all Vito Russo, it’s probably no coincidence that the Stargate alien is played by Jaye Davidson who also played the ‘chick with a dick’ in The Crying Game (1992), is surrounded by muscular young men in leather, and flies about in a spaceship that likes to sit on pointy pyramids. Nor is it without significance that in Independence Day, Harvey Fierstein, playing as usual an extremely annoying gay constantly on the phone to his mother (“Oh, mother, it’s AWFUL, the aliens are getting MORE ATTENTION than ME!”) is the first character to be killed by the alien attack. Eliminating early on (but not early enough for my money) the only Earthling who willingly takes it up the ass.

Hollywood science fiction these days is not so much about man’s fear of invasion from outer space as that of the invasion of man’s inner space. As Kevin McCarthy shouts to the freeway traffic in the classic 50s sci-fi paranoia flick Invasion of the Body Snatchers – ‘THEY’RE HERE ALREADY!!’

Standing right behind you.

13 thoughts on “Bottoms From Outer Space”