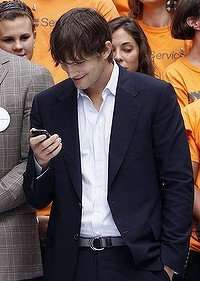 This story about men sealing their texts with a kiss got a lot of coverage around the world: Here’s the Sydney Morning Herald:

New research from mobile phone firm T-Mobile reveals nearly a quarter of men (22 per cent) regularly include a kiss on texts to their male mates, T-Mobile said in an emailed statement.

“Metrotextuality” is most widespread among 18-24 year old males with three quarters (75 per cent) regularly sealing texts with a kiss and 48 per cent admitting that the practice has become commonplace amongst their group of friends.

Nearly a quarter of this age group (23 per cent) even appreciate an “x’ in a text exchange from people that aren’t close friends.

Ever the keen/obsessive observer of masculine trends, I mentioned the phenomenon of young straight men signing off their text messages with kisses very briefly towards the end of this piece two years ago on The Sun’s attempt to queerbash footballers for holding hands (and I also mention how this old poof can’t quite bring himself to respond in kind.)

Thanks to technology and consumerism, male behaviour is changing extremely rapidly, despite what some of us might like to think of as ‘hard-wired’ and ‘immutable’ characteristics.  This recent story from Radiolab about what happened in a community of baboons in which most of the alpha males were killed off by TB, is also illuminating in this area: the surviving males, instead of fighting and spitting at one another, started grooming one another – which in baboon terms ‘would be less shocking than if they had grown wings and started to fly.’  Even more remarkable is the way in which males joining the group from outside also adopted the new non-aggressive male-grooming routine – despite growing up outside this culture in the baboon-bite-baboon world.  It suggests that even for apes a great deal of behaviour is socially mediated. And perhaps affection between male baboons can be as strong as competition.

Back in the world of the naked ape, because of the private, intimate yet long-distance nature of text messages men needn’t fear being humiliated and kept in line by the pack for daring to groom one another with xxx’s and within this discrete-indiscrete techno-ecosystem this practise has apparently become widespread. Now that it has been outed, note the baboonish response of many of the male commenters, who can’t quite choose between deriding the men who do this and denying it happens at all.  Either way, their violent response is completely impotent and far, far too late.

These ones posted below a similar article in Canada’s National Post seem to have been made by very red faced baboons indeed:

Wattowattowatto: BS! Homosexual men may do such a thing, and they may text in disproportionate numbers amongst other homosexual men. Normal men would never do such a thing. Once again, a non-story using misleading data to shock readers.

Jocko2: How gay! I don’t know why they need to invent a word like “Metrotextual,” when plain old “homosexual” will do. T-Mobile’s research that nearly 22% of men (and 75% of 18-25-year-old men!!) do this is clearly abject bull. This looks like something put out by The Onion. I smell a hoax here, bigtime!

And I smell someone panicking because they’re beginning to realise that their painfully uptight lifelong investment in homophobic ideas about masculinity might have been a complete waste of ulcers.

It isn’t just the way that men are using kisses at the end of their text messages to other men that is such a departure from expectations of ‘innately’ masculine behaviour – it’s the fact they’re sending these messages at all.  Back in the 90s baboonish stand up comedians made a good living out of awful jokes about how phones revealed the strangely reassuring differences between men and women: men were monosyllabic and practical and women wouldn’t’ shut up.  Men used phones as an instrument; women used them as an end in themselves.  Now a generation of young men have grown up who wear their pretty phones as accessories they’re never seen without and are always chattering pointlessly on them.

Usually at the gym, looking in the mirror, while sitting on a piece of equipment this old poof wants to use.

The Geeks Inherit the Earth

Buy-Curious: Have Men’s Mags Come Out To Themselves Yet?