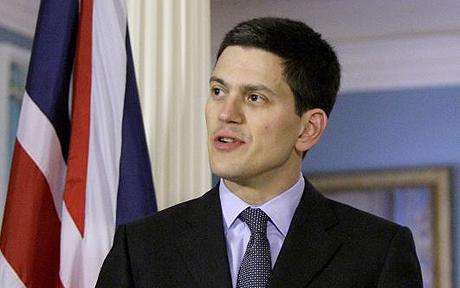 So, pretty, svelte – and somewhat swish – David Milliband and his million-dollar smile, who was gushingly described by Hillary Clinton as ‘attractive’ and ‘vibrant’, is the front-runner in the Labour leadership contest to replace the big clunking grimace of Gordon Brown with something more electable.

It seems highly likely that soon all three main political parties in the UK will soon be led by adorable 40-somethings who look like moisturised, pampered 30-somethings who never miss the gym – and whose suits are cut to advertise their shape rather than disguise it. Metrosexual politicians rule. Literally. The ‘new politics’ is looking increasingly like a kind of ‘metro-politics’, in which male politicians have to seduce the electorate with their looks and sensitivity in order to have any chance of ugly, hard power.

Despite famously using a poster of Cameron next to an Audi Quattro and warning ‘Don’t let him take you back to the 1980s’, it was Gordon Brown who looked like the throwback. Gene Hunt without the swagger, or the nostalgia. And more creases. (If Cameron looks like anyone from the Eighties, it’s definitely not Gene Hunt or mannish Mrs T – it’s Spandau Ballet’s Tony Hadley at his most preening.) Even without the financial meltdown Brown was never going to win those brightly-lit TV debates on our Widescreen HDTVs. Not because of anything he said of course, but because he looked like death on toast. Dry toast.

David Cameron and Nick Clegg by contrast are politicians with prime-time skin who have gone one step further and entered into a political metro-marriage. A straight civil partnership which proclaims to the world: this is a progressive affair where there is no ‘husband’ and no ‘wife’: we’re equals who are sensitive to each other’s needs. Plus we both look really fetching in our matching blue made-to-measure.

Nor is metro-politics just a British phenomenon. The most powerful man on the globe Barack ‘smokin hot’ Obama is a President several trouser sizes smaller than most American men his age who makes the Free World wait every day on his morning workout. Even the great white male hope of his Republican Party ‘girly man’ hating enemies is a former Cosmo centrefold. In keeping with the dictums of metro-politics, President Obama is something of his own First Lady in front of the camera, always knowing exactly where the most flattering camera angles are – famously winning the Democratic nomination from Hillary Clinton because he was much prettier than her, and sending a ‘thrill’ up the leg of straight male commentators.

Which brings us onto an apparently paradoxical aspect of the ‘progressiveness’ of the metro-politicians admiring their reflection in the polls. Whilst they may be more appealing to many women voters than more traditional, plainer politicians, and are often keen to present themselves as ‘post-feminist’, they tend to regard themselves as so sensitive and lovely that they don’t actually need women in their cabinets. Unless they’re a bit camp like Theresa May. Or a bit scary like Hillary Clinton.

Although backbencher Diane Abbot has thrown her bonnet into the ring in the Labour leadership contest, she isn’t regarded as a serious contender – in part because she’s considered ‘too abrasive’. Instead the choice seems to be between David Milliband’s full-wattage metrosexuality and his brother’s Ed’s less dazzling eco-friendly variety.

The smart and nicely turned out money is on David. But either way, Her Majesty’s Opposition will very likely soon be led – like Her Majesty’s Government – by two surprisingly young-looking straight men who openly profess their love and admiration for one another.

The End of Heterosexuality (As We’ve Known It)

How Ridley Scott invented the 1980s