The Starman Has Landed: Bowie and His Glam Love-Children

Lovely – in every sense – piece in the Guardian today by Gary Kemp, guitarist and songwriter and general brains behind 80s New Romantic norf London working class wide boys Spandau Ballet, about how he fell for David Bowie watching his epoch-making performance of ‘Starman’ on Top of the Pops in 1972. (I’d like to imagine it was inspired by my account in Saint Morrissey of how I fell in love with El Moz singing ‘This Charming Man’ on The Tube – Morrissey was to my generation what Bowie was to Kemp’s.)

‘The first time I fell in love it was with a man. It happened one Thursday evening in the bedroom of a flat in King’s Cross. I was a wide-eyed boy of 12 and the object of my passion had dyed orange hair and white nail varnish. Looking out from a tiny TV screen was a Mephistophelean messenger from the space age, a tinselled troubadour to give voice to my burgeoning sexuality. Pointing a manicured finger down the barrel of a BBC lens, he spoke to me: “I had to phone someone, so I picked on you.” I had been chosen.’

The melodic borrowing from Judy Garland’s ‘Somewhere Over the Rainbow’ was probably too subtle for most, but the bit where Bowie languorously and yet somehow mate-ishly drapes his arm round the golden Mick Ronson on the ‘family show’ that was Top of The Pops was a very calculated and inspiring gesture of defiance back in July 1972. I mean, look at them. Only a few months before Bowie had very publicly come out as bisexual (though perhaps to up the ante, in his famous interview with Melody Maker he had actually described himself as ‘gay‘).

If you can’t in 2010, in LGBT Pride week, at a time when the Conservative Prime Minister has gay celebs round for drinks at Number 10, quite understand why this caused a sensation, and why millions of dads went apoplectic about ‘that fackin’ pooftah!’, bear in mind that just five years previously any and all male-male sexual relations were still illegal in the UK. The very first Gay Pride march had only been held a few days before Bowie’s own parade through the nation’s front rooms. This single appearance by Bowie on Top of the Pops, a show watched by most of the UK back then – and every single kid that didn’t sing in the choir – was probably more significant and influential than all the UK Pride marches put together.

He later famously repudiated all this in 1983, the year of the sell-out (in every sense) Let’s Dance tour, claiming that saying he was bisexual was ‘the biggest mistake I ever made’. In 1993 he announced he had always been a ‘closet heterosexual’ and that despite his interest in the culture it produced, homosexuality and bisexuality ‘wasn’t something I was comfortable with at all’.

But in 2002 an older and perhaps less ambitious Bowie was asked if he still believed that. His response sounds more convincing:

‘Interesting. {Long pause} I don’t think it was a mistake in Europe, but it was a lot tougher in America. I had no problem with people knowing I was bisexual. But I had no inclination to hold any banners or be a representative of any group of people. I knew what I wanted to be, which was a songwriter and a performer, and I felt that bisexuality became my headline over here for so long. America is a very puritanical place, and I think it stood in the way of so much I wanted to do.’

Not for the last time, the power of the almighty Puritan dollar had triumphed over the sexually ambiguous English pop star and his fey, spangly, decadent Limey ways. Success in the US – something Bowie didn’t really achieve on a major scale until the Yuppie-suited respectability of Let’s Dance – is still regarded as the benchmark for British acts. Partly because it is such a vast market, of course, and because US music has influenced UK performers like Bowie so much, but also because since we lost the Second World War to the United States we have nurtured such a vast inferiority complex about our colonial ‘cousins’.

But America, we often forget over here in the UK, is a very foreign country indeed. One separated from us by much more than a shared ocean and language.

The UK is a funny little small island, with far too much media per head – which since it lost its Empire takes far too much interest in superficial, ‘effeminate’ things like music and fashion and gossip. And crucially, we’re basically a secular country and have been, more or less, since Henry VIII nationalised the monasteries. The UK is a country where the defunct popular tradition of Music Hall – which Bowie drew heavily upon – is probably of much greater cultural importance today than any of that dogmatic Pauline asceticism that calls itself ‘Christianity’.

And America? Well, America isn’t any of these things.

This is why the seriously flirtatious personal style of metrosexuality, which at the very least throws a languorous arm around the neck of bi-responsiveness – and which is much more David Bowie’s love-child than mine – really took root in the UK at the end of the Twentieth Century, largely without the muscular Christian anti-metro/anti-fag backlash that happened in the US in the mid-to-late Noughties.

In the UK, metrosexuality instead produced new kinds of ‘starmen’ such as David Beckham – football’s answer to David Bowie.

Look out your window I can see his light

If we can sparkle he may land tonight

There’s a Starman waiting in the sky…. 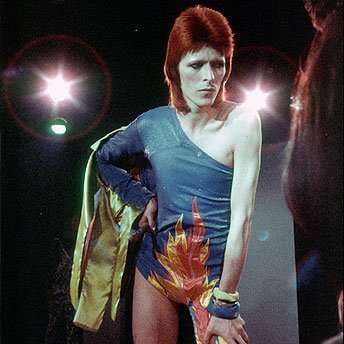 David Bowie’s Men’s Lib activism began early – here he is at the tender age of 17 being interviewed by the BBC about his Society of the Prevention of Cruelty to Long Haired Men
http://www.youtube.com/watch?v=jsNVsvvIfiM
(Special thanks to Paul Burston for very kindly taking me to see ‘The Dame’  – as he’s known in the business- at Wembley Arena, back in the dying years of the Twentieth Century. It was my first exposure to him – and although Ziggy had been buried at the Hammersmith Odeon twenty years past Bowie was still a revelation.)

Ken Comes Out – As Metro