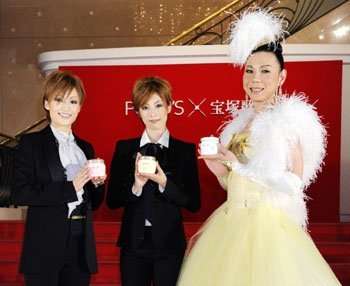 Perhaps if Gerard Butler was Japanese he might take up cross-dressing as a strategy for staying youthful instead of appearing in L’Oreal ads. And if you think it might harm his action hero career it doesn’t appear to have held James Franco back — reportedly he’s been offered the role of Jason Bourne in the Bourne series, replacing Mutton Damon.

From last week’s Japan Times about the rise in popularity of cross-dressing there — male and female:

‘He’s a 52-year-old medical doctor who goes by the name Ayaka Ogawa when living out his cross-dressing fantasies of being a woman in her mid-40s.

“As you see from my (cross-dressing) age, I look young when I disguise myself as a woman,” the doctor, who only wanted to be identified as Ogawa, said in a recent telephone interview. “I feel good being told I look young.”

He takes care of his skin because he wants to keep being praised, and says he looks more youthful during his cross-dressing (“josou”) life.’

The piece tends to gloss over the MTF cross-dressing and concentrates instead on the various reasons for the popularity of the FTM variety, which is, let’s face it, what usually grabs people’s attention. Besides, the slightly Beiber-esque FTM cross-dressers in the pic are overshadowed by the MTF’s headgear.

Does My Brain Look Big in This?