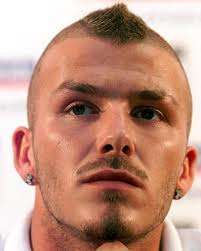 Facial hair fascinates me. I’m not actually much of a fan of it personally, but symbolically I’m besotted. Particularly the way that it is no longer a secondary sexual characteristic, a sign of manhood, or a love of Real Ale, but an adorable accessory that men today adopt and discard according to whim, following in the capricious, scented footsteps of Beckham et al.

Though of course, if you’re gay and living in a metropolitan area whim isn’t allowed. You have to sport a beard at all times. Otherwise you won’t get any dates. Gays will just hiss at you instead.

So I read with interest this YouGov survey published this week which provides some confirming data on the fashionability of face fuzz and its accessorization by males today: ‘stubble’ is reportedly the most popular form of facial hair today – especially with 18-24 year olds (51% say they have facial hair and 80% of those describe it as ‘stubble’). Stubble of course being the most easily adopted and discarded form of facial hair.

But the survey – called ‘Let’s Face It’ — is much less interesting for what it reports than for what it doesn’t. What it’s not facing. At all. The assumptions behind it and the way that compulsory heterosexuality is used to deprive all men of a voice, even about their own bodies.

Here’s the first paragraph of the YouGov press release/summary:

Are you male and looking for a date? It might be a good idea to shave beforehand, our survey suggests, as we discover that two thirds of British women prefer the appearance of a man without a beard, compared to less than one in ten who like the more hirsute type.

The first assumption of course is that the date a male is looking for is necessarily with a woman. (And as I say, if you’re gay you have to have a Captain Haddock to get a second look.) The second, and closely-related assumption, is that men’s affinity for facial hair is naturally to be measured entirely in terms of what women want:

Men are objects here, and not in a good way. They are not allowed subjective feelings about facial or chest hair, their own or anyone else’s. They merely have it or they don’t. What they might want is of no interest. Women are the only ones allowed to want here. (Even when they are lesbians — the survey polled 1417 women, and no mention is made of screening respondents on the basis of their sexuality, so statistically a significant number of them will have been Sapphic. Just as some of the 1340 men not asked this question would have been gay or bisexual.)

It would have been great to also find out whether males think facial hair enhances men’s appearance or not. Especially in a survey on male facial and chest hair. But they weren’t asked. YouGov apparently isn’t interested here in what men think about other men’s appearance. Though they were asked (but not mentioned in the press release) about their reasons for having facial hair — ‘habit’ was the most popular response at 32%. Amongst 18-39 year-olds ‘To make myself more attractive’ came in at 19%.

Either way I’d guess the popularity of stubble with young men today probably has rather less to do with what women (say they) want than the male celebs young men admire – and want. Even if it’s only about giving them permission to have stubble.

I don’t mention this to score gayist points and invoke ‘homophobia’. Or to diss the importance of women to most men. I mention it to illustrate how (hetero)sexist assumptions are sometimes used to shut men up. And maintain the reassuring pretense that even in a world where young men have become brazenly narcissistic and ‘passive’ – desiring to be desired – and where women are now allowed and indeed encouraged to have active preferences about men’s physical appearance, that it’s still all about good old heterosexuality.

When it’s as plain as the designer stubble on your face that it really aint.