David Beckham’s ‘End Result’ – Can You Handle It?

Shameless sporno star and uber-metrosexual David Beckham is ramming his eye-popping lunchbox down our collective throats again. This time with a media ‘offensive’ for his own line of men’s undies – and strangely shapeless vests – from Swedish-owned high street fashion chain H&M. 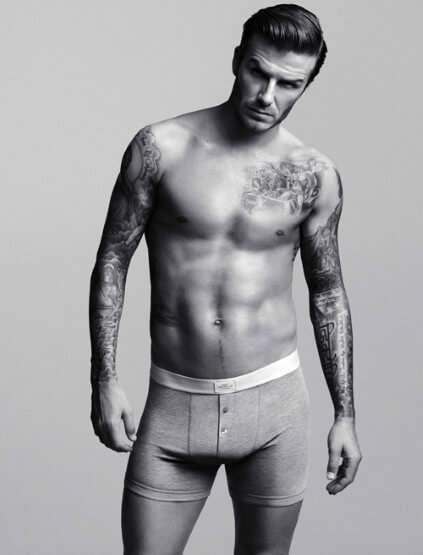 “I always want to challenge myself and this was such a rewarding experience for me. I’m very happy with the end result and I hope H&M’s male customers will be as excited as I am.”.

It’s true, you do look very pleased to see us again, David dear. But I worry that my ‘end result’ might not look quite so excited/exciting in your pants.

But Beck’s own palpable, prominent excitement is entirely understandable. He saw the humongous wads of cash Mr Armani was covered in when he brazenly pimped Beck’s designer cotton-clad tackle to the world a few years back. Becks was paid very handsomely for his services himself of course, but seems to have decided he can make even more filthy lucre by designing his packet himself and flogging it to the global punter (H&M is the second largest retailer in the world).

“I have had the idea of doing a bodywear collection for some time now. The push to do something of my own really came as a result of my collaboration with Armani. They told me that their gross turnover in 2007 was around €16 million, and after the campaign in 2008 it went up to €31 million, in 2008. It proved to me that there is a real market for good-looking, well-made men’s bodywear.” 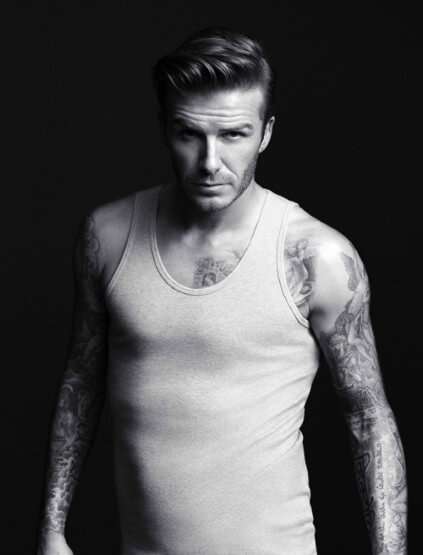 Whether or not his finished pants and vests are that kind of bodywear I’ll let you be the judge of. Bear in mind they are a lot more affordable than Mr Armani’s. I think proud-father-of-four Goldenballs is here going for ‘volume’. Metrosexy dadwear. Hence the emphasis he puts on comfort.

And as we’ve seen again and again in the last few years, there is definitely a real market for good-looking, well-made, famous, well-packaged men’s bodies. Advertisers, reality TV and Hollywood have practically had our eye out with them.

Regardless of his advancing years (he’s a frighteningly well-preserved, carb-free 37 this May) and consequently fading football career, Becks will always be fondly identified with that metrosexual revolution and will very likely get his money shot yet again.

He and his endowments, natural and Photo-shopped, always seems to wangle a way to attract the eye. Whatever you may think of his vests.

Let me Hear Your Body Talk