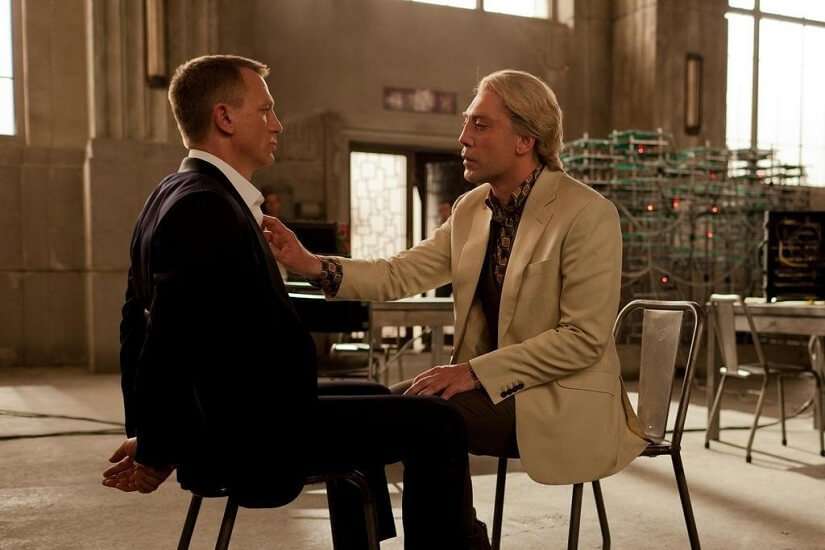 When at their first meeting in Skyfall a rather forwards Raul Silva, played by a bleached-blond Javier Bardem, takes caddish advantage of James Bond’s (Daniel Craig’s) indisposition – tied as he is to a chair – running his hands over 007’s craggy face, ripped chest and powerful thighs, and flirtatiously-threateningly suggesting “Well, first time for everything, Bond…” you could feel the audience in my local cinema freeze.

And when Bond delivered the now-famous laconic retort “What makes you think it’s my first time?” you could hear the audience’s sharp intake of breath over the THX sound system. Wot?! James Bond a bender!?!

Oh bloody hell!, I wanted to shout out, at Raul, the audience and the world in general. Has ANYONE been paying attention?? Of COURSE it’s not Bond’s first time! In Casino Royale Bond tried a spot of CBT with Mr Big and his knotted rope, while tied to a RIM CHAIR!!

Casino Royale rebooted and updated the tired, terminally naff Bond brand in 2006 in the pectorally-prominent form of Craig, a man whose appointment to the role initially provoked a chorus of complaints from Bond fanboys about his blondness, smoothness and the fact he kissed a man in another movie.

Craig’s Bond proved a sensation on screen, one which finally realised the tarty promise of Sean Connery’s beefily glamorous, disturbing sexuality in 1962’s Dr No – long since forgotten in the sexless knitwear catalogue model Bonds of the 70s-90s. By reconnecting Bond to the metrosexy revolution in masculine aesthetics, the male desire to be desired, that the original Bond movies anticipated but which had been left to other movies to exploit, Casino delivered us Bond as a 21st Century fully-fledged, self-objectifying sex-object. Bond as his own Bond girl. Hence Craig’s Ursula Andress in Speedos moment

So when Silva has a good feel of Bond’s pecs and thighs in Skyfall he’s just doing what pretty much everyone, male and female, has wanted to do since Casino Royale.

If Casino Royale outed Bond’s omnisexual tartiness, Skyfall, which is at least as good a movie – effacing the mortifying memory of Quantum of Solace – outs the queerness of the Bond villain. Someone who was often implicitly coded queer (those cats, those cigarette holders, those hulking goons), partly as a way of making unmarried, shaken-not-stirred Bond seem straighter. After all those decades of coding, Bardem’s openly flirtatious swishy villainy seems exhilirating. It’s certainly a great pleasure to watch.

Though, like Bond, Silva isn’t actually gay. As a result of the speculation surrounding Bond’s ‘shocking’ admission of his bi-curious past in Skyfall Craig was asked in an interview recently whether he thinks there could ever be a ‘gay James Bond’. “No,” he replied, “because he’s not gay. And I don’t think Javier [Bardem’s] character is either – I think he’d fuck anything.”

What’s ‘gay’ about Skyfall isn’t the thigh-squeezing, or even Daniel Craig’s circuit party tits (which I’m happy to report are regularly on display again). No, it’s the glorious camp excess. “Was that meant for me?” Bond asks Silva during an underground pursuit, after he detonates a bomb behind our hero by remote control, blowing a hole in the roof of the vault. “No,” deadpans Silva. “But this is.” Right on cue a tube train falls through the hole, headed for Bond, while Silva disappears up a ladder.

Some film critics complained that this scene is ‘over the top’. This makes me wonder:

a) What kind of movie franchise they think Bond is, and

b) Whether they have any sense of humour at all.

The whole premise of Skyfall is of course pretty camp: that Silva, a former ‘favourite’ agent of M’s is going to so much trouble – hacking MI6, stealing, decrypting and publishing lists of secret Nato agents, blowing up the MI6 building, personally storming the Houses of Parliament dressed as a David Walliams character – just to get his own back on M (played by gay icon Judi Dench) for dropping him.

Fortunately camp isn’t code here for ‘crap’. It’s a testament to Bardem’s skill as an actor and Sam Mendes’ direction that he’s vividly, entrancingly menacing. He steals every scene he’s in. Actually, his hair steals every scene he’s in. What’s more, you really feel, perhaps for the first time, that this Bond villain has a point. After all, what kind of fucked up family is MI6? Particularly since in the opening scene of the movie Bond is betrayed too – badly wounded and nearly killed after M orders another MI6 agent to take a dodgy shot at the baddie Bond is battling (atop a moving train, of course). ‘M’ is for ‘Mother’ – bad Mother.

Skyfall is very queer psychodrama – delving deep into the twisted family romance of MI6 and the orphan Bond’s quasi incestuous devotion to M. Silva may be on a deliciously queenie rampage, but we all know that it’s Dame Judi who is the real (Virgin) Queen. When Craig appeared in that embarrassing clip for the opening ceremony of the London Olympics this Summer it was quite clear to everyone that constitutional monarch Elizabeth Windsor was Judi’s mere understudy. M has the power of life and death, after all.

Silva’s first scene with Bond – “Do you like my island Mr Bond?” – is gripping, and not just in a groping sort of way. But the scene where he meets M and denounces her crimes and invites her to gaze upon her handiwork trumps it as a piece of pure theatre. Again, it’s deliberately overwrought – but then, so is any family romance. Even the ruthless, steely M is clearly affected by this confrontation with her aborted boy toy.

Perhaps because there’s not enough Bardem in it, the shoot-em up final reel is a bit of an anti-climax after the emotional tube-train crash of the first couple of hours. Even in a Bond film as Freudian as this one it is too symbolic for its own good. More like a bad dream than a finale, Bond and M – and an ancient Albert Finney – are holed up in his family estate in the Scottish Highlands, which he hasn’t visited since his father died when he was a boy. His buried past, in other words.

The Gothic, mouldering pile is called ‘Skyfall’ – a name which is possibly intended to bring to mind God’s favourite, Lucifer, being cast out of heaven. Sure enough, Silva, the agent who was cast out of MI6 by M, arrives with his goons and start shooting the place up in the kind of pyrotechnic assault we’ve seen in a hundred other movies.

Though as with the rest of Skyfall, the final reel is beautifully lit. The attack begins at dusk (Lucifer is the ‘evening star’) and the light progressively turns bluer until it is as dark as death, the only light the hellish orange of Bond’s ancestral home aflame. Like the family romance itself, Skyfall is suffused with nostalgia. Nostalgia for the Bond franchise (it’s a half century since Dr No was released). Nostalgia for 1960s aesthetics. Nostalgia for Britain and Britishness. For the Mother Country. And mother-love.

However, it won’t be giving too much away to say that Skyfall does finally press that button on 007’s behalf.

This review was originally written for the adult site Nightcharm

2 Replies to “The Swishy Villainy & Psychodrama of Skyfall”