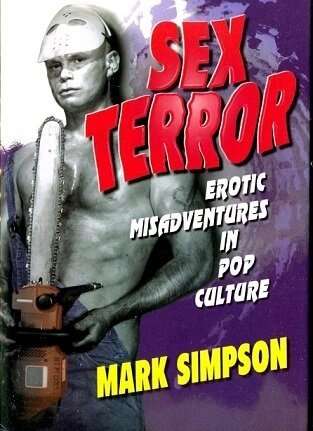 This book will change the way you think about sex. It may even put you off it altogether.

In his full-frontal follow-up to his widely acclaimed It’s a Queer World, Mark Simpson dispenses with the monkey business of sexuality and gets to grips with the organ grinder itself: SEX.

Subjecting our saucy new god to his sacrilegious satire, Simpson sins against every contemporary commandment about doing the nasty: It must be hot. It must be frequent. It must wake the neighbours. And it must be Who You Are.

Simpson argues that we all put far too much faith in sex these days, and that in actual fact sex is messy, confusing, frustrating, and ultimately disappointing.

Especially if you’re having it with him.

Along the way he gets worked up with Alexis Arquette over Stephen Baldwin’s bubble-butt, gets intimate with Dana International, Aiden Shaw and Bruce LaBruce, and – very gingerly – confronts Henry Rollins with those ‘gay’ rumours.

“MARVELLOUS… open Simpson’s book at any point, as many times as you want, and you’ll find the sort of gem-like sentences that Zadie Smith would give her white teeth for.”

“Setting common sexual sense on its ear, Simpson’s Swiftian proposals strike at an emotion dear to us: sexual desire. His anarchic mission is to free sex from sermonizing, convention, egoism, and cultural bias. But unlike Foucault, his deconstructing weapon is built of ribald humour and potshots at pretension. Simpson’s essays produce rancour and HILARIOUS LAUGHTER, DISBELIEF AND DELIGHT. Some call him wonderful, and some call him outrageous, but I call him A TRUE ORIGINAL and YOU SHOULDN’T MISS THIS BOOK.”

– Bruce Benderson, author of Pretending to Say No and User

“BRILLIANT… With surgical precision Mark Simpson peels away the layers of modern masculine culture, leaving few iconic figures un-scarred. This book is certain to provoke and likely to offend; we would expect nothing less from one of the most important voyeurs of contemporary life.”

“When the culture of sex breathes its final breath, Mark Simpson will be there to deliver the eulogy with great zeal. And what a GLORIOUSLY SARDONIC AND INSIGHTFUL farewell it will be!”

“One of those books that bounces up and down on your knee yelling ‘read me, read me…. Brutal honesty and razor wit  – a perfect feast. QUOTABLE GENIUS.”

“BLOODY GOOD…  every outrageous insight is just that – an insight into the modern  condition that often makes you laugh out loud and, if you are not entirely beyond hope, think. Simply some of the best writing on modern culture around.”

“One of England’s MOST ELOQUENT AND SARDONIC commentators.”

“Mark Simpson won’t be every reader’s cup of tea, but those who enjoy a biter blend of DARK HUMOUR AND KEEN SOCIAL OBSERVATION will want to drink deeply.”

“…never fails to amuse, bemuse, stun and stir… a writer at his peak, a SHAMELESS SUMPTUOUS SERVING OF SOCIAL SATIRE you’ll be digesting long after you put the book down”

English author and journalist Mark Simpson is credited/blamed for coining the word ‘metrosexual‘. Simpson is the author of several books including: Saint Morrissey, Male Impersonators, and Metrosexy.

“You people are insane!! These movies are TERRIBLE!!!”