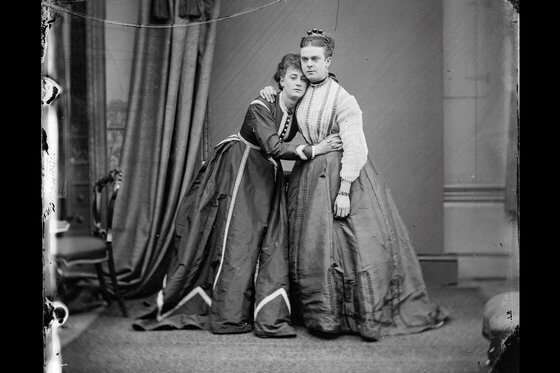 A look at the famous Victorian anuses of ‘Fanny and Stella’

“I had never seen anything like it before… I do not in my practise ever remember to have seen such an appearance of the anus, as those of the prisoners presented.”

So testified Dr Paul in shocked tones at the trial of Frederick Park and Ernest Boulton, two young, crossdressing clerks charged with sodomy in 1870 – a crime that then carried a penalty of a lifetime’s penal servitude.

Park and Boulton had been arrested in the Strand Theatre dressed as their coquettish, lascivious alter egos Fanny and Stella. The trial of “The Funny He-She Ladies” as the press dubbed them, was the sensation of the age. Largely forgotten until now, Neil McKenna’s highly readable recounting in Fanny and Stella: The Young Men Who Shocked Victorian England brings it roaring back to life.

According to the medical authorities of the day, the signs of sodomy were easily detectable. A wearing away of the rugae around the anus, making it resemble the female labia. Elongation of the penis, caused by the “traction” of sodomy. And dilation.

Dilation was the biggie. The way one tested for it was by the insertion of a professional finger. Repeatedly. If the sphincter failed to show enough resistance to the expert finger-fucking then you were dealing, alas, with a sodomite.

The appalled police doctor was, as we’ve seen, convinced he had fingered major sodomites. Six more doctors lined up to inspect the upraised rectums of Park and Boulton and insert their digits, repeatedly. After two fetid hours, five declared there were no signs of sodomy to be found on or in either arrested anus.

In fact, both Park and Boulton were guilty as proverbial sin. Their bottoms had been rogered senseless by half of London – though, unlike the good doctors, their partners usually paid. From respectable middle-class backgrounds they enjoyed working as brazen, hooting cross-dressing prostitutes in the evening, as you do.

The single dissenting doctor had a few years earlier treated Park repeatedly for a syphilitic sore in his anus.

But because the medical probing had produced the opposite medical opinion to the one hoped for – and because sodomy was such a serious offence (carrying a penalty of life with hard labour) – the Attorney-General had to withdraw all charges of actual sodomy.

Instead Boulton and Park were charged with the vaguer but still serious catch-all of “conspiracy to solicit, induce, procure and endeavour to persuade persons unknown to commit buggery”.

Seventeen dresses and gowns; quantities of skirts and petticoats; bodices and blouses; cloaks and shawls; ladies’ unmentionables, all a bit whiffy and worse for (working) wear, were paraded through the court as evidence.

Although cross-dressing was not in itself a crime, and was actually a popular form of burlesque entertainment at the time in which both Fanny and Stella had enjoyed some success, the Victorian state was keen to make the case – presented by Attorney General Sir Robert Collier himself – that their cross-dressing was part and parcel of their abominable sodomy and the “confusion” of the natural and godly gender order it represented.

The male anus dressed as a vagina.

This approach also backfired, spectacularly. Digby Seymour for the defence asked the court:

“Would young men engaged in the exchange of wicked and accursed embraces put on the dresses of women and go to theatres and public places for the purpose of exciting each other to the commission of this outrageous crime?”

In other words, the very obviousness and shamelessness of Stella and Fanny’s (deliciously outrageous) behaviour was presented as proof that they could not possibly be guilty. Which, in a strange, 20th-century gay pride sense, was sort of true.

But the defence’s ace in the, er, hole was a final, irresistible appeal to patriotism. “I trust that you will pronounce by your verdict,” intoned Digby Seymour, “that London is not cursed with the sins of Sodom, or Westminster tainted with the vices of Gomorrah.”

The jury did its duty and the “foolish” young men, as their defence termed them, were acquitted – having fooled most of their customers, the doctors, the courts and the imperious Victorian state.