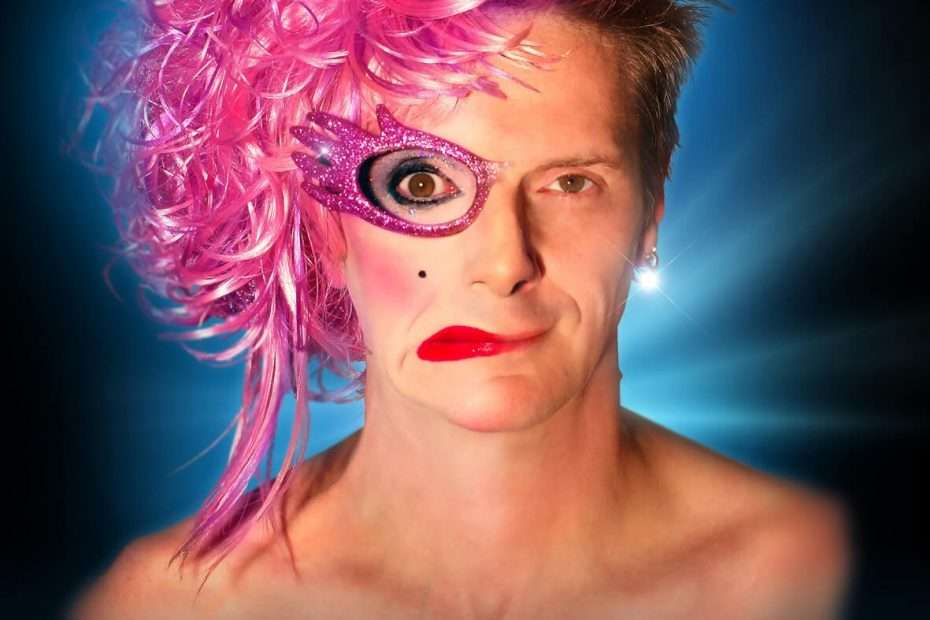 The intoxicatingly talented DEE, alias Jonathan Paul Hellyer, is performing his last ever Sunday show at London’s Royal Vauxhall Tavern this Easter weekend. Fame has finally found him, possums, and he’s moving to America. To salute him, his new life and the end of an era for London’s gay scene, I thought I’d post this appreciation from the early Noughties

I have a confession to make. I’ve been having an affair. For some time now I’ve been sneaking off to a slightly smelly Victorian drag pub in South London every Sunday afternoon to see a performer called ‘The Dame Edna Experience’. And every Sunday I’ve experienced… well, this is very embarrassing. True Love.

What does the Dame Edna Experience, aka Jonathan Paul Hellyer, do? Well, he tells a few dirty jokes, and then he sings some cheesy love songs, which he often makes fun of as he’s singing. In a black Basque, stockings horn-rimmed glasses and a blue-rinse wig. But somehow, he takes you from the base to the sublime to the ridiculous and back again leaving you bewitched, bothered and bewildered and wondering what Barry Humphries did to deserve the accolade.

Everyone in the place – and it is sold out every week – is transfixed by him. Even the shirtless gay clubbers coming down from their weekend’s raving stop chewing their gum and stare, slack-jawed.

To say he’s merely ‘funny’ or ‘has a great voice’ would be a libellous misrepresentation. Hellyer has a talent that seems to encompass the entire range of human emotion – and gender. He doesn’t just sing songs such as ‘Angels’ and ‘Think Twice’ note perfect, and in a voice uncannily like Celine Dion or Robbie Williams. He breathes something into these ponderous ditties that transforms their cheapness into something dangerously potent in a way that Baz Luhrmann would envy. Distilling Robbie-ness and Dion-ness into something intoxicating that the artists themselves could never quite be bothered to do.

So when he performs the irksome charity version of ‘Perfect Day’, rendering everyone from Lou Reed to Tammy Wynette, Bono to Ronan, Elton to Heather Small so intensely the originals seem counterfeit, you find yourself absurdly moved and amused – as much by the power of your own response as anything else. And when he finally pulls off that blue wig and those glasses and lets us look into his eyes you notice that this divine trickster is young and attractive too, those legs rather shapely in those stockings.

Such a perfect Sunday. I’m so glad I spent it with you. You made me forget myself – I thought I was someone else. Someone good.