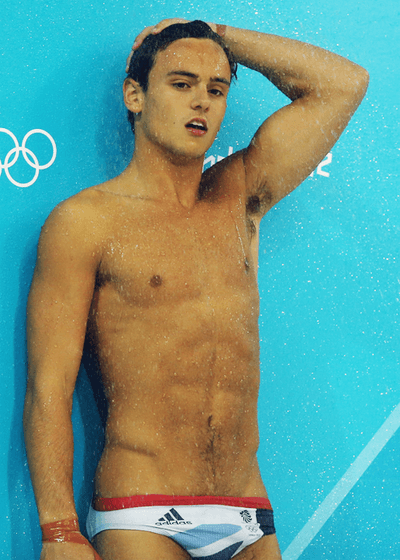 Tom Daley isn’t gay. But the bronze medallist Olympic diver and presenter of celebrity Speedo show Splash! – recently voted ‘World’s Sexiest Man’ by the readers of gay mag Attitude – doesn’t mind if you think he is. Last weekend he told The Mirror:

“I think it’s funny when people say I’m gay… I laugh it off,” says Tom… “I’m not. But even if I was, I wouldn’t be ashamed. It wouldn’t bother me in the slightest what people thought.’

Quite a few gay pals of mine know better. Not because of any special ‘inside information’ gleaned from the gay grapevine mind, but simply because they ‘can tell’. Because they’ve seen him on telly they seem to know his sexual orientation better than Daley does himself. Maybe it’s because he smiles a lot, takes care over his appearance, is well-mannered and loves his mum. Or maybe it’s because he doesn’t have a girlfriend at the moment.

But whatever the reason I suspect many of them might be rather less convinced – or interested in expressing an opinion at all – if Tom didn’t look hot in a pair of spectacularly abbreviated swimming trunks.

This kind of gay insistence about Daley’s sexuality (and other pretty boys in the public eye, such as the Olympic gymnast and Strictly star Louis Smith) isn’t malicious, in fact it’s meant very affectionately. But unlike Daley I’m not quite so inclined to laugh it off. In a sense it’s the ‘friendly fire’ version of the homophobic tweets Daley has experienced, and the bullying which made him change schools. Unintentionally it reinforces straight-and-narrow and increasingly obsolete ideas about what boys should and shouldn’t be – if they don’t conform to that then they ‘must’ be gay. Though in the snuggly sense of ‘one of us’ – rather than the phobic sense of ‘one of them’.

Perhaps, for the sake of argument, despite what he actually says Daley ‘really’ is gay, or bisexual. Perhaps he’s currently kidding himself, or us – or both. But so what if he is? He’s nineteen. People should be prepared let Tom be Tom and not project their own past onto his present.

Although gay people – myself included – often pride themselves on their ‘gaydar’, their ability to ‘spot’ another gay person, it’s a very imprecise instrument and getting more so all the time. Now that the streets are awash with pretty, moussed, moisturised, gym-toned young men in pastel colours that look like they’re auditioning to be in One Direction – and who, like boy band stars don’t mind showing physical affection for one another – the poor old gaydar is getting very jammed indeed. Perhaps it’s time to turn it off, or at least dial it down a bit. Particularly since Grindr is a much more accurate detection system.

In a world where being gay – or looking gay – is no longer such a big deal, a world that gay people worked hard to bring about, perhaps we shouldn’t make such a big deal out whether someone ‘really’ is or isn’t any more. Especially if they’re as generous with their fit body as Daley. (Who, by the way, was born the same year as the metrosexual.)

Like many lads today Daley clearly loves to be looked at – and he has way of showering after a dive in front of billions that is, shall we say, very sensual. It’s part of the reason he welcomes the gaze of gays. As he told The Mirror.

“I can understand why I have a massive gay following – I spend most of my life half naked in trunks on a diving board showing off my bare chest.

“I often joke I wear more to bed than I do to work.”

Being voted the sexiest guy in the world by a gay magazine (Daley’s aesthetic daddy David Beckham was runner-up) might result in your straight mates ‘gently taking the mick’ as Daley reports, but in this age of rampant male tartiness, in which almost every straight male athlete that doesn’t look like the back end of a bus has been on the cover of a gay mag in their knickers, they’re probably more than a tad jealous too.