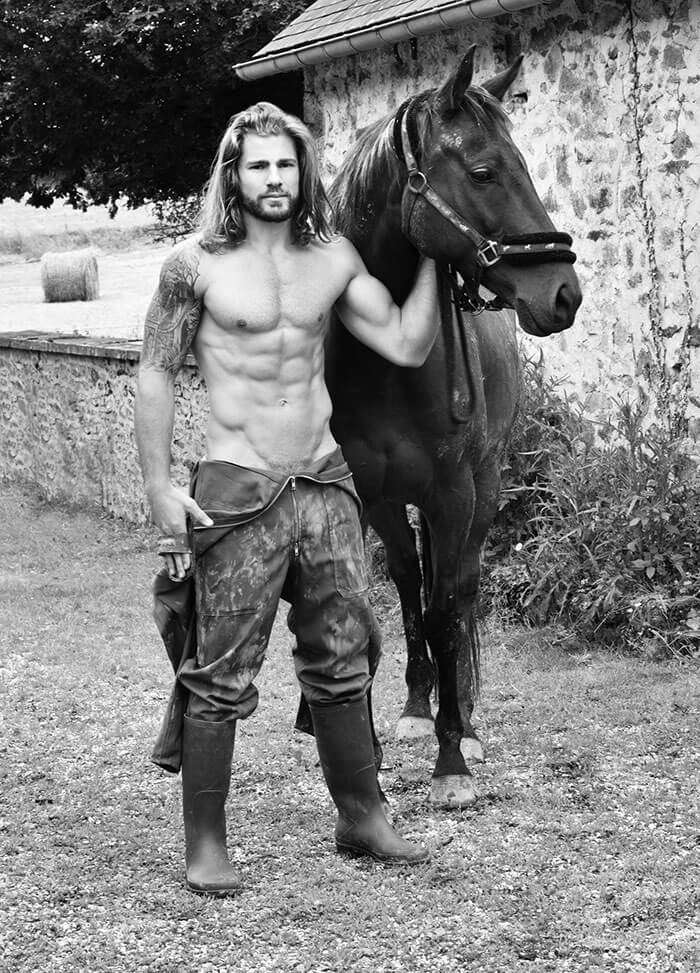 Horse: ‘Oh, MERDE! He’s got his tits out for the cameras again – I’m not going to get fed for HOURS!’

We’ve seen a great deal of male pin-up tit-ilation over the last decade or so, in which men in traditionally masculine occupations get their clothes off and their tarty on as they occupy the traditionally ‘feminine’ and ‘passive’ position of the glammed-up calendar girl.

And they’ve turned out to be naturals.

It started with the famous Dieux du Stade sporno calendars , spreading to firemen, Mormon missionaries, Catholic priests, rowers, Royal Marines and then pretty much to the entire male sex. The few men that haven’t already appeared in a tarty calendar by now have sexualised and published themselves via topless selfies and Instagram.

Not that I’m complaining. When it comes to male objectification too much is never enough.

Now French farmers are the latest traditionally blokey profession to get the full glamour model calendar boy treatment, in this instance from French fashion photographer Fred Goudon in his Le Calendrier des Agriculteurs 2017

So we see the ‘agriculteurs‘ lovingly lensed while going about their daily, honest toil in field and farmyard, keeping La France fed – while their overalls keep slipping off them in the hot Gallic sun, leaving them casually nearly naked. Save for their full body make-up.

If this calendar is to be believed, the French peasantry are definitely no longer revolting – but nor are they eating any cake. Nor in fact any carbs at all after 6pm.

It’s easy to make fun – so I shall, with captions – but while the French farmers collected here do look rather more spornosexual than pastoral, at least they’re not lumbosexuals.