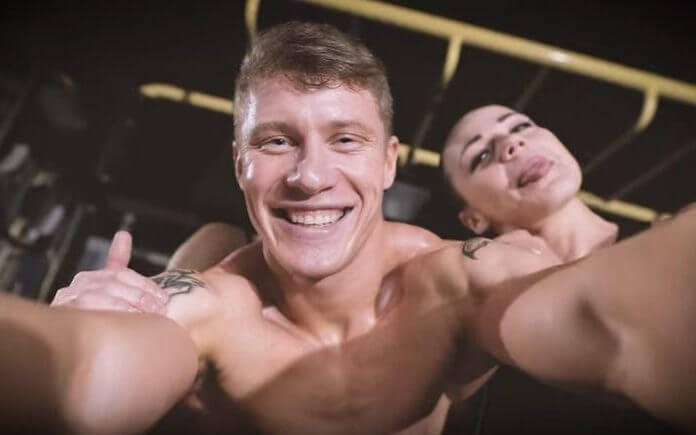 Finally! Spornosexuals no longer have to run the risk of socialising with people who don’t work out, own no Lycra, and think that whey isolate sounds absolutely vomitous.

Now, thanks to a Munich-based company, spornos have their very own ‘social’ app that will allow them to find, locate and interact with other spornos in their vicinity. Which of course is likely to be someone sweating on the machine next to them in the gym they spend their lives in.

Gymder, as it’s called, is billed as a free location-based app designed to help you find “mutually interested workout buddies nearby right when you need them”. Apparently it “uniquely connects people in a fitness context – thereby users can find each other and train together anytime, anywhere.”

It may seem a little silly that people who go to the gym every day need an app to find people who go to the gym, but hey that’s the kind of ‘social’ world we live in now. After all, everyone at the gym is now either staring at their phones between sets (sometimes during sets), or wearing huge, DON’T TALK TO ME earphones that look like they belong to 747 handlers.

Of course, phrases like “mutually interested”, “right when you need them”, and “anytime, anywhere” do rather suggest, like the name itself, that Gymder can serve as a Grindr for spornosexuals. That, like the Olivia Newton John song, it helps you get physical, in more ways than one.

The fact that the website states it isn’t a dating app is neither here nor there. To be successful even as a fitness dating app, Gymder probably needs to officially assert it’s not about dating but about fitness. And besides, because humans are human, everything social can be sexual – even something as desiccated as LinkedIn.

The potential for Gymder to be used for hunky hook ups sent Gizmodo and Mashable off the deep end of disapproval last week. They both worked themselves into a spectacularly prudish lather, ranting about how “creepy” and “nefarious” this app is.

Gizmodo went so far to described Gymder as a “terrifying development” – because an app for people interested in the cultivation of beautiful bodies might be used for getting to know people who cultivate beautiful bodies better?

Gizmodo’s concern was partly directed at some of the app’s permissions, but the main offence here is sexualising something already sexualised. We are solemnly informed that “gyms are not appropriate places to find dates” and that “any normal person probably wants to be left alone and suffer through their workout without a stranger ogling at their beautiful body”.

But then, Mr Gizmodo and Ms Mashable do seem to be complaining about a spornosexual party they haven’t been invited to.

The ad for the app certainly presents a party vibe – an adamantly hetero one. Most of the ‘interactions’ presented are male/female: a prize, pumped sporno male takes a selfie with ladies literally hanging off him, his large tongue hanging out. Men are seen touching each other – but only through a punch, or a fist-bump.

There’s an implicit disavowal of anything ‘gay’ about Gymder in the ad, which is why we should treat with the same caution as the disavowal that it’s not a dating app. What better way to meet other male spornos on the down low than on a dating app that isn’t a dating app and isn’t gay?