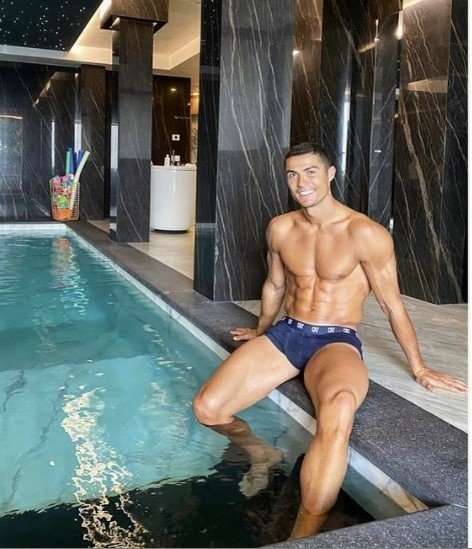 The world’s most famous man this week became the first person to pass 250 million followers on Instagram. A milestone in human e-volution.

Already the most popular personality on social media, 35-year-old Cristiano Ronaldo is now just rubbing our noses in it. The Juventus star has 100 million more followers than all 20 Premier League clubs combined. His arch-rival Lionel Messi trails way behind him, in seventh place, with ‘only’ 174 million followers.

The five-time Ballon d’Or winner is bigger and hencher than football. So, for a while, was his UK metrosexual prototype, David Beckham in his pretty early Noughties prime. But Ronaldo’s humongous fame has dwarfed Beckhams’.

Partly because Ronaldo really is the astonishing once-in-a-lifetime footballer that Beckham was imagined to be by those who didn’t really follow football. But also because the Portuguese chap somehow manages to be even more tarty than his hardly retiring Brit predecessor. (And was regularly queer bashed for it by the UK media when he played for Manchester United.)

Born into a modest, working class Madeiran family, his pride in showing off the shiny symbols of his extraordinary success – the pools, the houses, the yachts, and the shiny bod again – is also part of his willingness to share. He also includes lots of photos of himself with his girlfriend Georgina Rodriguez, his four children, his mother, relations and friends. But fame is necessarily a lonely business, especially at these stratospheric levels, so it is the photos of him alone in his Olympian palaces, nearly naked and tensing his abs and quads ready to receive our lonely gaze that are the most ‘Insta’.

He also is even more intimately and profitably connected to his fans than Beckham ever was: Ronaldo reputedly makes a cool $1m per Instagram post. Helping to pay for all those palaces.

Perhaps that’s because he knows exactly what he’s doing, is completely unashamed of his full-body vanity, and isn’t afraid to play with his desire for our desire of him. In one Insta post he poses in swimwear on his yacht next to a gorgeous sunset, with the caption:

‘There are only two options: the view or ME. I let you choose your favourite one?! ??’

There is of course no question. Ronaldo’s beauty eclipses the sunset.

And 2.0 to Beckham’s 1.0 when it comes to the insatiable, uncorked, totally ripped genie that is the male desire to be desired.