The End of Michael Jacksonism 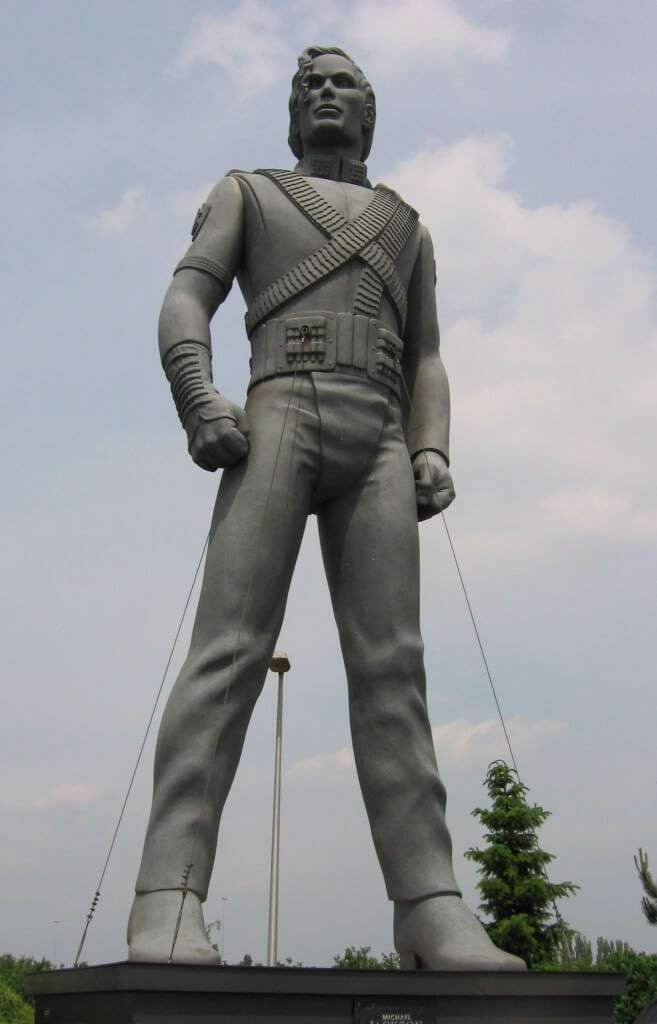 (Edited from a feature that originally appeared the Independent on Sunday in July 1997, titled ‘Now the end is near’)

Only a Michael Jackson gig could begin with a ten-minute computer-generated sci-fi video which obviously cost more than most artists can muster for an album.

The film beamed on to the three giant screens at Wembley, the first leg on MJ’s current tour of Britain, show a golden android getting into a capsule and then riding a big-dipper track at high speed through pop culture, art and the last thirty years of history – the moon landings, little Michael performing ABC, Nixon, hunger and war in Africa, tall skinny Michael in ‘Wannna Be Startin’ Somethin’’, the Berlin Wall coming down, macho Michael in Bad. And then, on the vast stage with a large bang and a flash, out steps the android and takes off his mask. It’s the King of Pop!

Michael Jackson, you see, is the present, the past and the future. He’s our connection with the looking glass world of media: he is the man in the mirror. His-story is our story. Michael Jackson is all human culture. Moondancing.

All the same, few things could be as uncool in Britain today as admitting you like Michael Jackson. You can wear slip-on shoes. You can watch A Question of Sport. You can even drink lager and black – but don’t ever, ever admit that you like Michael Jackson. American, inauthentic, corporate, sincere, tacky, irony-free and no sense of modesty whatsoever, MJ is the antithesis of Britpop – the great Satan to Britpop’s fundamentalism.

When uber-cool Jarvis Cocker made his now legendary stage invasion at last year’s Brit awards, interrupting the King of Pop’s ascension into heaven serenaded by a choir of angelic children during a vast performance of ‘Earth Song’, he was supported not so much by revulsion at the (dropped) child-abuse allegations but by a much stronger feeling: revulsion at an American taking themselves so seriously at the Brit Awards.

And yet, Jarvis’ mooning might possibly have been inspired by  jealousy. MJ’s performance of ‘Earth Song’ (containing probably the best and most bathetic pop lyric ever: ‘And what about the elephants?’) did steal the show and really was a religious experience. Yes, it was astonishingly arrogant, tasteless, blasphemous and doolally, but then the best pop always is.

Brit-pop – despite its much-heralded demise – still has a stranglehold on British pop music, and is a highly reactionary music form, harking back to the Sixties sound of all-white bands like the Beatles, but surgically removing any of the R&B sound that informed so much of the ‘Fab Four’s’ music. Oasis are not the Beatles again: they’re the Beatles minus Chuck Berry. And MJ, despite his kabuki-mime pallor, is very ‘black’ in the sense that most of his music is rhythmically orientated.

Though of course the basis of MJ’s brand that he mixes his American blackness with American whiteness until you can hardly distinguish the two: ‘Black or White’ is as much a question as a statement – like asking how you like your coffee. (Funnily enough, it was probably precisely because his skin-colour changed that many white British critics felt able to attack Jackson.)

So I’d love to report that the latest show is brilliant – but in fact it’s an epic, grinding disappointment. The intro video was by far the best part of it. Anti-climax is probably inevitable when you go to see the most famous man in the world. But there’s also a kind of pointlessness to it. MJ is so fantastically plastic, so extravagantly synthetic that there is nothing really added by going to see him ‘live’ and watching him on a giant video juke-box with thousands of others in a sports arena. In fact, something is taken away. MJ is a simulacrum, a copy for which no original exists. The image is the man, not the tiny imposter jigging around on stage between the video screens the size of football pitches – and beneath the towering Stalinist statue of himself.

It’s precisely because MJ is so phoney, so artificial, so mass-produced, processed and pre-digested that he has been so popular. MJ is the Big Mac of pop music – scorned by faddists and know-betters but very popular with people who want something fast, fun, and nutrition-free that gives them a buzz. Most people are uncool, thank god, and quite happy that way.

But for all his popularity with the masses, the MJ brand, like Big Macs, is clearly in decline. This tour has failed to sell out and there isn’t anything approaching the ‘Jacksonmania’ that has greeted previous ones. His last couple of albums have been less than impressive and the kiddie-fiddling charges can’t have helped. But perhaps the real problem for MJ Inc is beyond the MD’s control. The world’s love affair with Americana has peaked. When the Cold War ended and the Stalinist statues were pulled down and replaced with McDonald’s golden arches, people stopped dreaming the American dream. It had become an inescapable reality.

Michael Jackson, the greatest embodiment of that dream, the creature of consumerism, individualism and aspirationalism, the most famous man who never lived, is also a victim of his own success. Hence the hubristic use of that blockbuster intro video and Ceaucescu-esque statues on the cover of the History album and next to the stage on this tour is eerily apt. Those who try to embody history usually end up victims of it: toppling over beneath the weight of their own contradictions. And besides, Jacksonism isn’t much of a replacement for Jacksonmania.

Put another way, Michael’s audience has grown up while he, valiantly has not. At Wembley, while MJ cavorted with some female dancers on-stage, a fan behind me shouted out: ‘They’re a bit old for you, aren’t they Michael?’

You really know the world’s changed when MJ fans get cynical.

Shortly after Obama’s election last year, Israeli-American designer Elie Tahari made a prediction: ‘I think the fashion industry will have a ball with him.’ So far, this is one fashion prediction that has been on the money. Since Obama’s glitzy inauguration this January, the men’s fashion world, too often associated with a ‘Whites Only’ catwalk, hasn’t stopped dancing with the first non-white in the White House.

At the menswear shows in Milan this January a waving, smiling young Barack Obama look-a-likey led the final walk-out for Lanvin, complete with Inaugural Address overcoat, leather gloves and USA tie-pin. Givenchy meanwhile included several male models of colour for their show, and their new poster campaign features a Obama-esqe young man in an open, white silky shirt with sleeves rolled up for business, full lips parted as if caught mid-speech.

Oscar Garnica, agent at Request Models in New York says that he and his contacts in the business have seen a more consistent use of black models recently. ‘Since the Black issue of Vogue, and the Obamas took the White House, that inspiration is running through a lot of the collections,’ he says. ‘Having more images of people of colour around has probably made designers more comfortable about adding colour to their aesthetic.’ But he is cautious about the long term impact: ‘Now that we are seeing four-five models of color on the runway, will the designers continue booking these numbers? Well, that remains to be seen.’

Whatever else Obama’s Presidency might signify, the fashion world seems to have decreed that, for this season at least, the black male is power, hope, leadership – in a word: style.

Ironically, part of the reason that Obama’s booking by the American electorate has helped non-white models get bookings with the fashion industry is because as Tahari has pointed out, ‘he looks like a male model… he’s built so well.’ Obama has the height, the looks, the teeth – the ‘suntanned’ skin as Italian Premier Berlusconi infamously put it – and the instinctive understanding of where the camera is and what angle best suits him. He is patently photogenic – and his photogeneticity has helped to make this young, inexperienced man Presidential. To some degree, he got the job because he gave good face. Even his acceptance speech at the Democratic Convention last Summer was delivered at the end of a catwalk.

So no wonder the fashion world wants to appropriate some of that. Michelle might be First Lady, and Obama might have exclaimed to the world ‘How beautiful is my wife?’ on inauguration night, but pretty as she is, she probably made the cover of Vogue because of her husband’s looks.

As a result of his religiously regular gym sessions on the Stairmaster, Obama is not the same shape as most US male politicians – or in fact, most US males. He really is ‘un-American’ – he can wear fashionable clothes. Even though he usually chooses to wear those Teflon-coated Hart, Schaffner, Marx & Hillman suits from Chicago, his have a narrow cut that advertises the fact that he has a body, buns and even angles. Gone are the flapping flannels of traditional US male politicians. (Even his political message was self-consciously stylish: those famous campaign slogans ‘HOPE’ and ‘CHANGE!’ were printed in Gotham font – originally developed for the men’s style magazine GQ.)

Most remarkably of all, he gets away with it. In a white US male politician such self-care and stylishness would probably be ridiculed. John Edwards you may remember got into terrible trouble for combing his hair and being pretty.

The fickle fashion world will of course tire of its clinch with Obama. But perhaps something will endure: perhaps the men’s fashion business will be less inclined than in the past to think of blackness as something ‘street’ and thus ‘sportswear’.

As Oscar Garnica at Request Models puts it: ‘Despite images of suave black men like Sidney Poitier, Sammy Davis Jr, Harry Belafonte, Denzel Washington, there has always been a narrow definition of what black is allowed to be. My best hope is that Obama’s rise to the highest office in the land will shine a spotlight on the fact that there is more to the black male image than just the stereotypes.’