A remarkably, refreshingly reasonable treatment of the Spitzer scandal and the indispensable social role of prostitutes by a woman, Minette Marin, in The London Times (if a straight man had written this he would probably have faced a lengthy free sex ban):

Right up and down the scale, a man can rent a girl a great deal better and more cooperative than the woman he lives with. She will be probably be much more sexually experienced and more accomplished than most wives too. In plain English, or so I am told by perfectly nice men, prostitutes tend to be better at it. They tend to be younger and more energetic. They are also prepared to do things which her indoors might draw the line at. Some prostitutes provide tender loving care, too; the famous madam Cynthia Payne provided her suburban clients with comfort food after the act in the form of poached eggs on toast.

The other awkward fact, which most people must know, but somehow prefer to ignore, is that men often prefer sex without a relationship. Perhaps that is wrong of them, but one must concede that relationships can be wearing, particularly marriage, and sometimes a man just wants time out, and sex without strings is clearly a source of great pleasure, at least for men. If you were an evolutionary biologist you might argue that unfettered sex is entirely natural to men. One might at least agree that hogamous higamous, man seems to be a bit polygamous.

Gay marriage may have had a lot of press lately, along with the consoling idea that homos are becoming homebodies, but what is rather less publicised is that gay male marriage is, by definition, a much more ‘realistic’ arrangement than the traditional variety. Because it involves two men, they usually don’t hold each other up to such exacting sexual standards. They can’t kid themselves – or each other. Truth be told, the easygoing attitude of many gay partners towards sex outside the relationship – and the use of online cruising sites like Gaydar – would be intolerable for most heterosexual women, and many heterosexual men for that matter.

Male cruising produces even more hysteria and hypocrisy than prostitution – when it involves a man married to a woman. In the midst of all the loudly proclaimed sanctimony over Spitzer’s use of call girls, no one is suggesting that the former NY Governor is obviously a congenital visitor of prostitutes and this this is the truth of who he is and hence his marriage must have been a complete sham from day one and in fact his whole life has been a lie.

No, that’s something reserved for Senators busted in dubious airport rest-room entrapments.

But almost. Someone arrested in the same sting, using the same entrapment who decided to fight the charge – as Craig now wishes he had done – has been acquitted. Somehow I doubt this news story will get much coverage, because as everyone knows that Craig is GUILTY! and GAY! and a HYPOCRITE!, right?

Vince Tuzon, 39, of Minneapolis, claimed he couldn’t be guilty of interfering with the undercover officer’s privacy because the officer is the one who invited the invasion with foot-tapping. That is an argument Craig has raised in trying to withdraw his guilty plea.

“My client really feels that he was set up,” defense lawyer Jeffrey Dean said after the verdict. “He stopped in to use the restroom. He was using the toilet when he was essentially bombarded with overtures.”

Dean said his client would not comment, but he said he hoped the verdict would deter similar sting operations.

“The police created a situation where there was none,” he said.

These kind of entrapments of mostly married men like Craig rely on them not daring to contest and go to trial – and who can blame them, given the treatment that has been meted out to Craig by the public and his colleagues once his misdemeanour was made public? Out of 41 men arrested during this sting operation at Minneapolis airport, only two fought the charge. One was convicted, one acquitted.

The haste and undisguised glee that liberals – and gays – displayed in rushing to condemn Craig and their willingness to believe everything the entrapping, toe-tapping pretty policemen had to say – compared to, say, a jury – was much more indecent than anything he was accused of.

But of course, Craig can’t be allowed the benefit of the doubt by liberals because he’s a Republican.

Nor by his own party because they don’t want to seem… liberal. 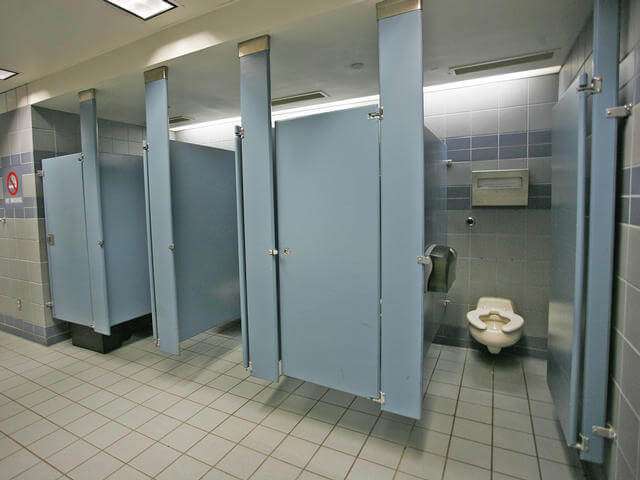 Whether or not Idaho’s Senator Larry Craig likes cock or not, following his arrest for ‘lewd conduct’ in a men’s room at Minneapolis airport this week one thing is for sure: a lot of cock has been written about him. Here’s Melissa McEwan offering a typical – if relatively kind – commentary in the Guardian:

‘Voting against the interests of the LGBT community displays either a callous lack of feeling towards people with whom he shares a vested interest, or it’s a hypocritical attempt to ensure his longevity as a politician.’

Call me pedantic, but tapping your foot or putting your hand under a toilet stall partition doesn’t make you particularly lesbian, gay, bisexual or transgendered. Or part of any community with whom you share ‘vested interests’.

Judging by the rush to ‘out’ Craig as a ‘hypocritical closeted gay’ by hordes of callous bloggers and columnists, and the scorn poured on his claims that he’s not gay, it seems that liberals are equipped with even better and stricter sexpolicing instincts than Minnesota’s Finest. Liberals don’t just finger your collar, they finger your soul – divining your innermost desires, making identifications on your behalf and working out what your own vested interests are for you. Even though they’ve never met you or shared a bathroom with you.

After all, Minnesota’s sexpolice, as the (cute, young) arresting officer (pictured above) makes clear in the taped interview with Craig, are not concerned whether someone is gay or not – merely whether they might be soliciting sex in a bathroom. Or whether they respond to their own flirtatious footsie. And by the way, I know I’m being pedantic again, but we don’t even know that Craig was looking for sex in that bathroom. Yes, of course, it seems quite possible, very likely even, but we only have a policeman’s word for it. And liberals don’t usually fall over themselves to believe a policeman, especially when he’s paid to hang around toilets all day like ripe cottage cheese in a mousetrap. Let alone one that seems to have, on the tape, possibly a self-righteous political axe to grind (‘no wonder this country is going down the tubes!’).

Unless of course they’re entrapping a conservative politician.

Even if Craig was definitely, unquestionably a dick-craving, tap-dancing cottager, it wouldn’t mean that he was gay, or that he should feel any affinity to the gay community. As safer-sex educators can tell you, rather a lot of men have casual anonymous sex with other men without seeing themselves as gay, or even bisexual. Or Democrat.

Now, you may think them wrongheaded. You may think them closeted and self-loathing and in denial. You may consider them creepy. But that’s just what you think – it’s not necessarily who they are. You may wish the world was a tidier place, where any departure from official heterosexuality was ‘Gay’ or ‘Lesbian’ or ‘Bisexual’ – and proudly identified itself as such – but sexual behaviour isn’t like that. Sexual behaviour into identity doesn’t go. Cripes, desire into identity doesn’t even fit very well. As police officials admit, most of the men they arrest in bathrooms are married (and probably the main reason, along with the repeated threats of jail-time from the arresting officer if they don’t ‘co-operate’ and ‘make it easy on yourself’, why most, like Craig, don’t fight the charge in court).

If sexuality is a murky business, even what we mean by ‘sex’ is not always as clear as we like to pretend. In the teeth of the state -sponsored witch-hunt by sexpoliceman (and judge and jury) Ken Starr, Bill Clinton’s denial that he had sex with Monica Lewinsky was not simply the lawyerly sophistry or bald-faced ‘lie’ that almost everyone, however they estimated the importance of it, denounced it as being at the time. A good Southern Baptist, Clinton wouldn’t have considered that oral sex constituted ‘sex’ – and in fact he was careful never to have intercourse with Lewinsky. Nor is this simply Baptist, or fuddy-duddy thinking. In the same decade, the American Medical Association found that 60% of American college students didn’t consider oral sex ‘sex’. In other words, probably most of the Americans condemning Clinton for his ‘lies’ were being… hypocritical.

Now that the shoe is on the other foot (straying under the stall partition) the same kind of sanctimonious solidarity appears to have been ranged against Craig – but with interest. His own party, appalled at the merest whiff of the men’s room, have glanced at the toilet paper stuck to his shoe and run off screaming. Republican Presidential hopeful Mitt Romney, just a few days ago, a friend and close political ally, wrinkled his Mormon nose, described the affair in his best Lady Bracknell as ‘disgusting’ and disowned Craig; faced with zero support from his GOP comrades Craig now seems likely to resign. Politically, he’s toast.

Yes, Craig is a Senator for a Party I have no love for, a party which panders to the gay-bashing of the religious right and which launched a criminal war. Craig has supported policies like ‘Don’t ask, don’t’ tell’ which drum out men and women from the Armed Forces for less than he was accused of. And yes, he may well be – like much of the Republican Party – pretending to virtues he doesn’t possess. He is, after all, a politician. He may also have lied through his teeth. (Again, he’s a politician.) But I can’t help but have some sympathy for a hunted, rural thing (Idaho is the home of ‘famous potatoes’) and everyone of whatever political stripe in the US appears to want to throw Craig into the nearest deep-fat fryer.

When talking about people’s sex lives, liberals should probably think twice about hurling the world ‘hypocrite’ around with as much relish as conservatives like to use the word ‘immoral’ or ‘pervert’. It’s much the same kind of public shaming. It used to be called stoning. Let him who is without sin cast the first blog.

Moreover, I’d like to venture, somewhat controversially, that ‘hypocrisy’ is a word that has had a bit of a bad press, especially in the confessional culture of the US. What is a ‘hypocrite’ anyway? Someone whose private life fails to match up to his public image? That’s not even the definition of a politician – that’s the definition of a human being. Besides, sometimes hypocrisy might simply be the voice of experience.

Craig may cut a preposterous figure, but what’s even more preposterous is the sight of a long line of liberals forming to hammer on the stall door this married-with-grandkids Republican’s been locked in by the media – and his own ‘moment of madness’ – yelling, ‘COME OUT!! YOU’RE GAY, YOU GODDAMN HYPOCRITE!! YOU’RE SHOWING A CALLOUS LACK OF VESTED SELF-INTEREST TO YOUR LGBT COMMUNITY!!’.