Football may not be coming home, after England’s Euros finals defeat earlier this year, but football’s greatest star, and perhaps the world’s most famous face and body, is going to be ‘back where I belong’. In England. According to his recent Insta post (336m followers).

The striking Portuguese striker Cristiano Ronaldo is returning, in total triumph, from Juventus to the place where he began his international career, Manchester United FC – with a two year contract: a cool 20M Euros for those hot lallies.

Now 36-years-old, he left Manchester United for Real Madrid back in 2009, when he was 24, with a then-record transfer deal, after a stellar but stormy six year career at Old Trafford. Leaving these shores to boos and catcalls, he got hench – and gained five Ballon d’Ors, scored the most goals ever in international football (111), the Champions League (134) and professional football (785).

He’s still a shredded power on the pitch, but his glory days, like his once-phenomenal speed, are probably mostly behind him. Still, it should be a passionate reunion.

But if England was ‘home’, then it was an abusive one. It will be memory-holed by today’s virtue-signalling press, but for much of his time here, ‘Twinkle toes’ as he was dubbed, was a figure of tabloid hate, and perhaps the nearest thing to an ‘out’ gay footballer in the UK.

Not for his sexual habits, which seemed to involve female supermodels, but because he likes the colour pink, wore a flower behind his ear on holiday, cries, is openly physically affectionate towards male friends, wears Speedos, is Portuguese, and most particularly for being apparently completely unafraid of being called GAY!! by the British press.

He was happy to be light in his pink loafers.

Ronaldophobia – the pathological fear and loathing of an immodest young man too pretty and talented by halves – was a national obsession. His looks, his gifts, his unabashed vanity and vulgarity, and, worst of all, this once dirt poor, now filthy-rich Madeiran’s total lack of interest in what the press called him brought out the absolute worst in the English.

Especially, of course, middle-aged, male hacks who might have been young once, but never pretty.

Inevitably, this footballer who desired to be desired for his sculpted physique and pouting face as much as his sporting prowess, has long been an object of fascination for metrodaddy. Although he seemed like his apprentice to begin with, Ronaldo was even prettier and much more talented than David Beckham.

And also the ‘total package’ physically and commercially, in a way that Beckham, now 46, never quite was. DB7 was essentially just a prototype for CR7.

Although Becks was very happy to strip off for Armani and Esquire and be ‘objectified’, launching his own underwear design for H&M with his, er, bum, he was ‘athletic’ but not ‘buff’ – preferring to decorate his upper body with ink, rather than muscles. Sometimes, especially in the Armani campaigns, it seemed as if Photoshop had done much of the ab-work.

Ronaldo however, had Photoshopped himself in real life. (And eschews ink.)

To mark his return to English football, and perhaps his soccer swansong, I’ve collected below some of my musings on the made Madeiran, in chronological order. Starting with a piece from 2008 about The Sun‘s blatantly homophobic obsession with the ‘arch metrosexual’ footballer as they call him – and his ‘too dark’ tan. Even today’s Sun wouldn’t dream of publishing this stuff: which is perhaps why it’s vanished from their website.

His departure from Manchester United – and English life, June 2009:

We Loved You Really, Ronaldo

How Ronaldo became the most Insta man eva, Jan 2021: 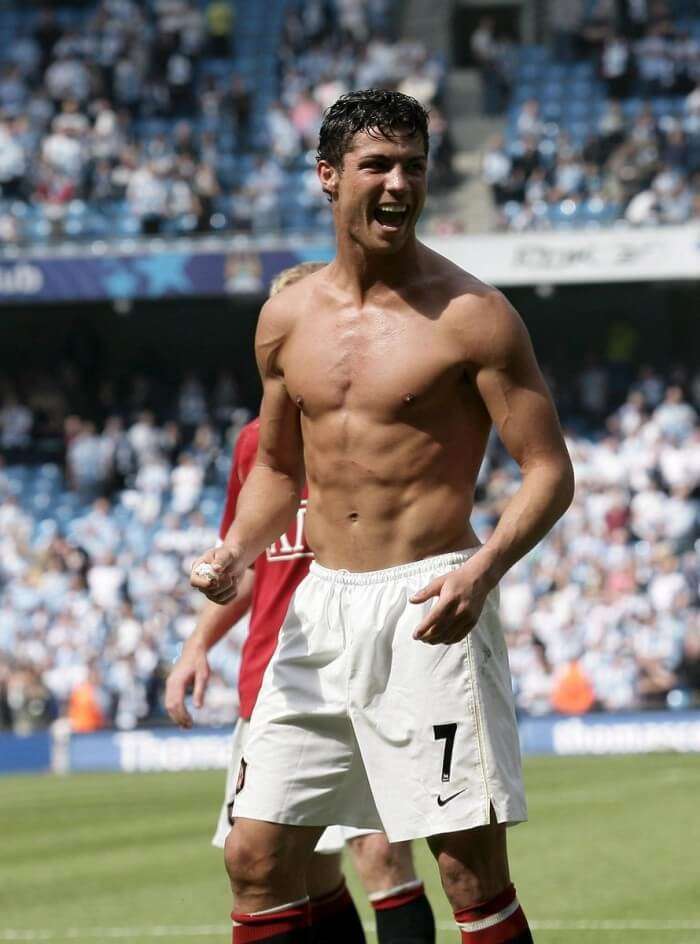 He prickled you see, our ugly, mean-minded, spiteful, spitting jealousy. We were jealous of his talent, his looks, his body, his youth, his money and most of all of his total lack of interest in what the English media and terrace culture thought of him and his dress sense and the way they kept shouting ‘winker!’ and ‘poof!’ to try and get his attention.

It just made us even more frenzied and passionate and helpless that the way we obsessed over everything about him, from the darkness of his tan, to the size of his beach shorts, meant nothing to him. He ignored our stalkerish behaviour, and our playground bullying, and just kept on being Cristiano. He didn’t need us. He didn’t even bloody notice us. He was hot. He knew he was hot. And worst of all, there was nothing we could do about it. No wonder we hated him.

And now it seems he’s leaving us behind for good – and will probably forget about us before he even lands in Madrid. The bastard!

Our most popular tabloid The Sun has run a particularly bitchy campaign against him for years. Most recently, they devoted pages of phoney outrage to the fact that he wore a pink baseball cap on holiday in LA, and had the effrontery to wear a flower in his ear. Apparently he’s also personally to blame for turning today’s pro footballers into metrosexuals and is the evil ‘queen’ behind what they like to call ‘The Campions League’.

In short, Ronaldo has been on the receiving end of abuse that would be deemed ‘homophobic’ in a trice if it were directed at someone actually gay. But this isn’t just homophobia in the form of metrophobia, this is good old English hypocrisy at work: The Sun exploits the way young footballers look today to sell papers, filling their pages almost daily with pictures of them being tarty – and then of course damns them for making us look at them.

Ronaldo united the English in ways that few other things do these days. The editor of snooty Esquire for instance, a magazine that likes to see itself as being the opposite end of the media and social spectrum to The Sun, recently joined in the national gang bang of Ronaldo, taking aim at his pretty pouting face in a piece sniffing at the vulgarity of English footballers, and the way they

‘pile on the designer labels with gay abandon (Ronaldo), accessorise with far too many sparkly things (Ronaldo) and haven’t yet discovered that logos a go-go have gone out of fashion (Ronaldo).’

Yes dear, but Ronaldo has more natural beauty, sexiness and vitality in his left foot than a hundred back issues of Esquire – a magazine that would benefit enormously from a little vulgarity: I mean, it might be mistaken for something actually alive. It’s probably Ronaldo’s ‘gay abandon’ which is the most wonderful and insufferable thing about him to the English. After all, it’s the sign that someone is genuinely free – they genuinely don’t care what the neighbours/bloke down the pub/The Sun/Esquire think, and they do and wear what they like, damn them.

This is also probably the reason why he was hated so much for his on-pitch naughtiness – not so much the cheating itself, but the brazenness of it. The flamboyance of it! Ronaldo was hated and envied because he broke the rules in plain view. And could behave like a spoilt child. The English you see can never forgive someone for doing publicly what they have to spend so much time and energy hiding.

As Ronaldo said, matter-of-factly, in response to the English media’s frenzy over the pink hat with the flower: ‘I don’t see what is wrong with that if you are comfortable with your sexuality.’ But the English aren’t comfortable, Ronaldo. In any sense. Don’t remind us of it!.

David Beckham managed, more or less, to get away with sarongs and nail polish and worse. But that was partly because Beckham wasn’t as talented a footballer as Ronaldo, wasn’t as pretty, or as young. And, unlike Ronaldo, was very, very concerned with handling the English press and his public image: he really cared about us and what we thought, and so was generally regarded as ‘nice’. Most importantly, in the end Becks was English. He may have been a tart, but he was our tart (though at the moment he appears to be Mr Armani’s.)

The problem with Portuguese Ronaldo, and the reason ultimately why he was so resented and the target of such passionate ambivalence, was that he wasn’t ours. He was always only on loan – which is why whenever rumours of a move abroad surfaced the hate campaign in the press would reach new, tremulous heights.

But now he’s really going. And we’re really going to miss him. But being English, the way we’ll express that is by saying: ‘Good riddance, you WINKER!!’