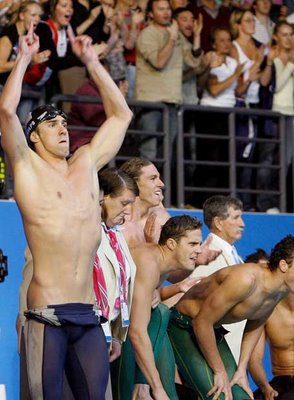 If you’ve been watching the noble Olympics in a slightly pervey way, treating all that lycra and fit young firm flesh on your HD screens as a form of illicit spornography then you deserve to be spanked soundly with a spiked running shoe.

But you’re not alone.

America’s prestigious NBC no less are doing it too.

With an online splurge of swim-boy nakedness called ‘Ab-Fab’ it asks you to ‘Guess the Swimmer’ – by identifying the headless topless torsos of selected Olympic totty.

In other words, it presents photos of top-flight swimmers as if they were headless naked profile pics on Manhunt or Gaydar. At the very least, it takes it for granted that you’ve been studying their bodies rather closely. They should really go the whole hog and provide a ‘MESSAGE ME!’ button to send those naughty athletes our phone numbers.

Someone with more morals than me might be inclined to huff and puff a little at this non-consensual spornographic exploitation of the golden swim-boys. But then, they are encouraging it, those devilish rascals, with their low-slung pants showing off their storm-proof ‘cum-gutters’ and saucy ‘come-hither’ pelvic tatts. They know exactly what kind of world we’re living in – and they seem determined to give it a semi. And when you see NBC’s full-length pic of multi-Gold-medal-winner Phelps – the slim-hipped superstar whose seismic popularity might just overcome America’s deep-seated Speedophobia – you realise that, like so many young men today, he’s already practically stripping for Fratmen TV , even when he’s wearing jeans and underpants. (And why he deserves yet another Gold – for tarting.)

Meanwhile, two US National wrestlers have permanently lost their place on the team and their scholarships for actually doing just that.