Even if they are wearing numbered, different-coloured shirts.

Well, can you come up with a better explanation what the rugger-buggery is going on in this slightly creepy latex-laden ad for Lucozade Sport ‘Strictly for the Home Nations Only’?

Pegged to the 2015 Rugby World Cup in Twickenham and starring big buff bearded England captain Chris Robshaw and chums, I’ve watched it several times and it still makes no sense to me. Maybe it’s because I don’t follow rugby. Or maybe it’s because I’m not an advertising creative who pretends to follow rugby.

The alternative explanations seem kinda kinky-gimpy. Are we meant to wonder what really went down in the back of that minivan when those norty Wallaby wannabes were cornered in the underground car park? By those strapping England lads wearing muscle-tees and expressionless faces? All that bad acting should definitely carry a Triga warning.

Yes, of course, the ‘straight’ subliminal commercial message here, hedged around with misfiring humour, is that if you drink Lucozade Sport, a sugary ‘recovery drink’, you will look like Robshaw. This is generally the way the supplements industry works – some ads more explicitly than others. But I’m not sure that ‘acceptable’ message isn’t drowned out here by more disturbing/confusing ones. Masculinity as male impersonation – a Mission Impossible. (This, after all, is what team sports fans are doing when they wear a replica shirt.)

I admit I’m biased: the recent fashion for styled-beard-with-styled-hair looks to me like a hairy onesie, a mullet mask. One that I imagine wearers peeling off at the end of the day, breathing a sigh of relief, applying lots of wet wipes to their face and neck – and leaving it to soak in a bucket by the bed.

Mind you, I still totally would ‘wear’ Robshaw.

PS This web ad below from the same campaign is also v confusing – but who cares?

Tom Daley Comes Out – As Happy

In the affecting, intimate-yet-professional YouTube clip above, a slightly red-eyed and emotional Tom Daley, the Olympic medal winning British diver and best thing to happen to Speedos since Mark Spitz, says he was misquoted in an interview earlier this year in which he appeared to deny he was gay (albeit insisting he wouldn’t be ashamed if he was). He went on to make an announcement that you have probably already read about.

‘Now I feel ready to talk about my relationships. And come spring my life changed massively when I met someone and they make me feel so safe, happy and everything feels great. And that someone is a guy.’

Cue banner headlines announcing TOM DALEY COMES OUT!!. Millions of really witty Tweets about #TomGayley. And The Daily Telegraph informing us on the front page of their online edition that nineteen-year-old Tom has announced he is a nineteenth century medical classification: ‘homosexual’.

Though in the actual clip rather than people’s overheated minds Tom says no such thing. What he Tom Daley, the person whose sexuality we’re all pronouncing-pouncing on comes out as is: someone dating a man who makes him feel safe and happy.

He also goes on to say: ‘I still fancy girls, of course’. He doesn’t in fact define his sexuality at any point, as gay, straight or even bisexual. That may change. Or it might not. And I’m sure everyone has an opinion on that.

But frankly, it doesn’t matter. Whatever we might like to analyse or gossip or speculate – and I’m guilty of all those vices myself – in the end it’s really not our concern. It’s nineteen-year-old Tom’s concern. For all the crowing yesterday from people who ALWAYS KNEW that Tom was A GAY, currently his sexuality remains officially undefined – even though yes, he does still have pretty eyes a soft voice and a really pert bum.

Tom’s journey is his own to make. And sexuality itself is a journey that doesn’t have to have a final destination. But try telling that to the press. This excellent piece in the Guardian by Nichi Hodgson about the media’s need to label Tom as GAY said it best:

“The only facts that speak for themselves are that Daley is dating a man, and wants to be honest about the fact so the media doesn’t try to make assertions about his personal life and preferences for him. Instead, the only thing that has been outed today is the media’s rigidity – and stupidity – when it comes to reporting on sexuality.”

Perhaps Tom might have been able to tell the world he was dating a guy a bit sooner if the world, straight and gay hadn’t been yelling YOU’RE GAY!!! at him for most of his teens. If we all dialled the gaydar down a little and erred on the side of open-mindedness it would make it a lot easier for guys to be open about their interest in other guys. Or bronzer and Speedos.

Though perhaps that is to miss part of the point of gaydar – that it can be a form of surveillance. A way of policing men’s appearance, gender style and sex lives, even and especially when it’s gay men operating it. It’s a source of constant wonder to me how many gay people for all their pride in their super-accurate long-distance gaydar can’t see the sexual liberation wood for the gay trees.

This is the bit in Tom’s vid that we’re all not hearing:

“In an ideal world I would not be doing this video because it should not matter.” 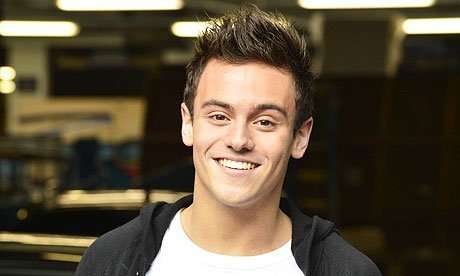